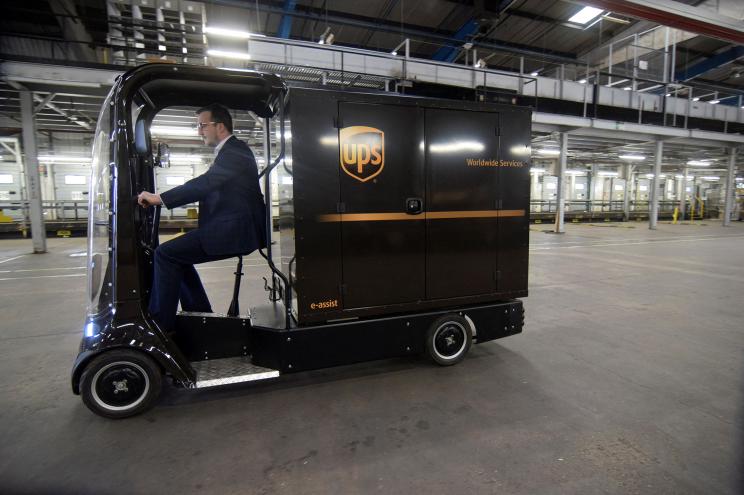 UPS said Friday it was trying out a four-wheeled “eQuad” electric cargo bike for deliveries in densely packed urban areas, where bikes have better and easier access, to complement its push into electric vehicles. The package-delivery giant is trialing around 100 of the electric bikes, designed and built by British firm Fernhay, in seven European markets and will also launch trials in the United States and some Asian markets, Luke Wake, UPS vice president of fleet maintenance and engineering, told Reuters. UPS said it would also use four-wheeled electric bikes from other manufacturers for the trials, but did not disclose names. As well as making public commitments to cut their carbon footprints, package-delivery companies are seeking new ways to cut the cost of last-mile deliveries given soaring e-commerce orders. UPS’ eQuad has an electric-assisted top speed of around 25 kilometers (15.5 miles) — if you pedal hard you can go faster — and can haul up to 200 kilograms (441 lb) of packages. Its electric battery has a range of around 40 miles (64 km), which Wake said would be more than adequate for urban routes. The vehicle is only 36 inches (91 cm) wide, so it can legally use bike lanes and enter pedestrian zones that UPS’ vans and trucks cannot access. Under normal circumstances, drivers would have to get out of their vehicles, load packages on carts and haul them to customers. UPS’ Wake said the Atlanta-based company sees an opportunity to scale up the use of the bikes in megacities and complement its range of vans and trucks. “There are more and more opportunities for zero-emission solutions like this that can alleviate inner-city congestion,” Wake said while demonstrating the eQuad at a UPS package facility in London. “It can also help our operations be more efficient at the same time.” Rivals FedEx and Deutsche Postunit DHL are also experimenting with electric cargo bikes as part of their own zero-emission vehicle plans. UPS is working with electric van makers like UK startups Arrival and Tevva, plus U.S. truck maker Xos.