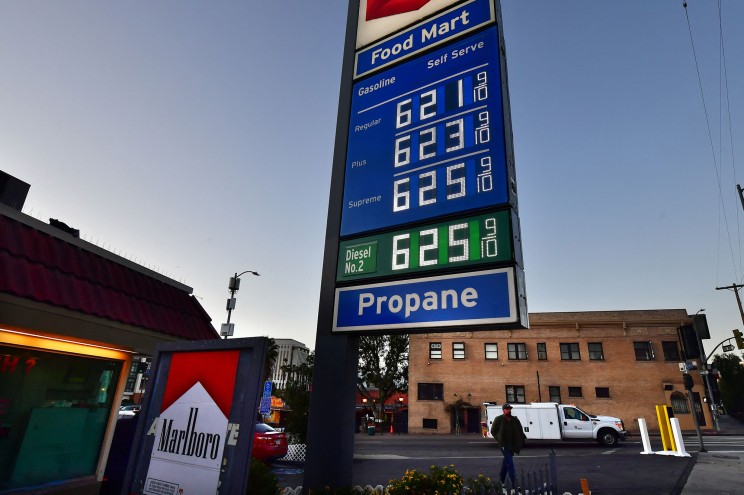 Soaring US gas prices are likely to get even worse after Russia launched a full-fledged invasion of Ukraine — with some experts warning that costs could climb to $5 per gallon or higher in the coming months. As crude oil prices continue to surge, the national average of a gallon of gasoline could hit $3.75 within the next two weeks — a level that could be just “the tip of the iceberg,” according to Gas Buddy analyst Patrick De Haan. The current national average is about $3.54, according to AAA. Prices could surge even higher if Russia responds to severe sanctions from the US and its allies by curbing oil exports — a move that could push the global cost per barrel to record highs. “Oil could go up $20, $40, $60 per barrel,” De Haan told The Post regarding that scenario. Right now, a barrel is $92 in the US and close to $100 in London. If oil spikes even higher, the national average could hit $4.50 a gallon, he said. And though $5-a-gallon gas “feels improbable” at the moment, De Haan warned that it’s “not impossible.” US drivers are already paying steep prices at the pump with inflation at a four-decade high. The US benchmark oil index surged to near $100 per barrel on Thursday after Russia — a key global fuel supplier — defied warnings from the international community and sent troops across the border. By late afternoon in New York, it had settled back down to just over $92. President Biden and others have already warned the Russia-Ukraine conflict could result in higher gas prices. “I know this is hard, and Americans are already hurting. I will do everything in my power to limit the pain the American people are feeling at the gas pump,” the president said at a press conference Thursday. Some industry analysts predict prices will jump even higher if a prolonged military conflict between Russia and Ukraine ensues. Get the latest updates in the Russia-Ukraine conflict with the Post’s live coverage. Energy Word founder Dan Dicker is among those predicting a record surge in consumer gas prices. He has warned that oil prices could reach $150 per barrel — the highest on record. The geopolitical crisis is only the latest development for a roiling energy market. Dicker noted the market has been “decimated by low prices for six years” and has contended with hundreds of bankruptcies among domestic oil firms. Dicker cited massive spikes in demand for fuel as the economy recovers from the COVID-19 pandemic, as well as strong economic growth, as key factors pushing gas prices higher. “There’s a lot of pent-up demand for energy that’s coming out of the woodwork right now and the supply cannot respond to that. It’s as simple as that. Not just in this country but everywhere else,” Dicker told The Post. “The Russians are just adding more fuel to that fire, but the fire was already burning.”