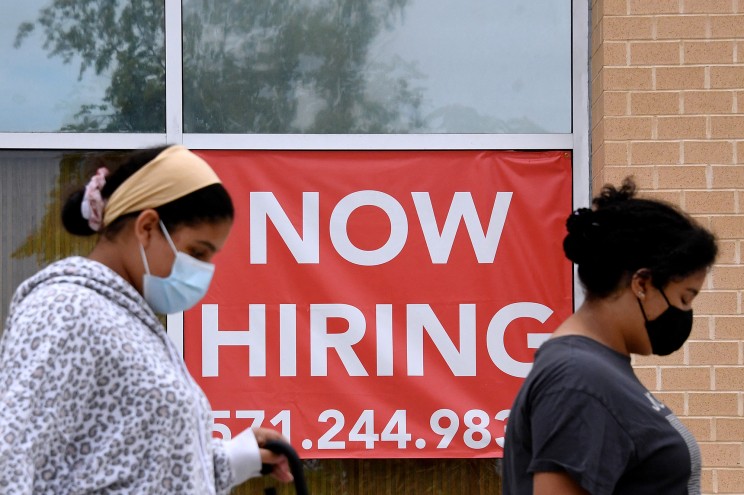 US businesses posted a near-record level of open jobs in January, a trend that has helped push up workers’ pay and added to inflationary pressures in the US economy. Employers posted 11.3 million jobs at the end of January, down slightly from a record of 11.4 million in December, the Labor Department said Wednesday. The number of people quitting their jobs slipped to 4.25 million, down from 4.4 million, though January’s figure is still 23% above pre-pandemic levels. Millions of people are taking advantage of numerous opportunities to switch jobs, often for higher pay. The vast majority of those quitting do so to take another position. The figures are for January and as a result do not reflect any potential impact from Russia’s invasion of Ukraine, though few economists anticipate the war will reduce hiring in the immediate future. Average hourly pay increased 5.1% in February compared with a year earlier, according to US statistics released last week, a rapid gain that forces companies to either become more efficient or raise prices to offset their higher labor costs. In some industries such as restaurants, large pay gains for workers have driven prices higher. On Thursday, the government will issue its inflation report, which economists expect will show that consumer prices leaped 7.9% in February compared with a year ago, according to data provider FactSet. That would be the biggest gain in four decades. Wednesday’s report underscores the distorted nature of the job market after two years of the pandemic. There are 1.7 available jobs for every unemployed worker, which has led to widespread complaints among businesses about worker shortages. That’s good for employees if it enables them to demand higher pay. But it can also clog up supply chains if trucking and other logistics firms can’t meet demand for shipments. In other cases, businesses have to turn down work for lack of employees. Wednesday’s job opening report follows the release last week of national employment data for February. It showed that employers added a robust 678,000 jobs in February, the most in seven months. The unemployment rate fell to 3.8%, the lowest since the pandemic began, from 4% in January. More Americans are resuming job searches, according to last week’s jobs report, though the increase was modest. More job-seekers would make it easier for companies to fill jobs and reduce some of the inflationary pressures that are keeping prices high. The Federal Reserve is nearly certain to raise its benchmark short-term interest rate when it meets next week, its first increase since 2018, in an effort to cool inflation. Fed Chair Jerome Powell said in congressional hearings last week that it wasn’t yet clear what impact Russia’s invasion would have on the US economy. It has already pushed up gas prices above $4 a gallon, on average, across the country. But he said the Fed had planned before the war to initiate a series of rate hikes next week, and for now would “carefully” follow that plan.