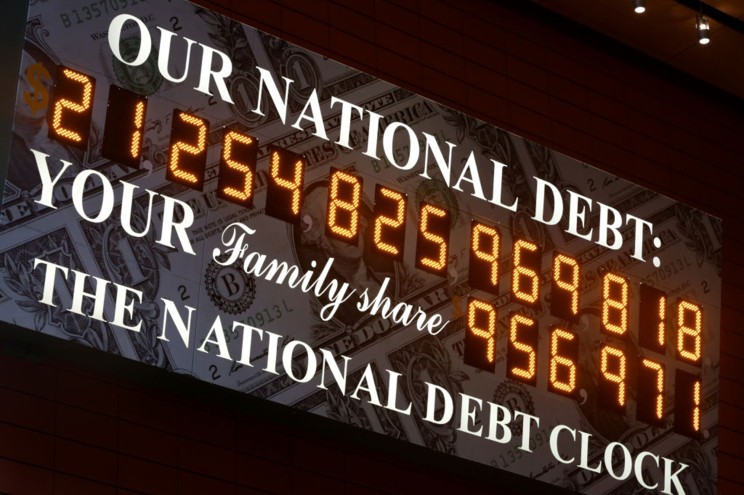 America’s national debt has surpassed $30 trillion for the first time in history, the Treasury Department said this week. The federal government exceeded the troubling threshold following a wave of borrowing and spending during the COVID-19 pandemic. The national debt has expanded by approximately $7 trillion since January 2020, weeks before the pandemic began, as the Trump and Biden administrations dispersed stimulus payments and took other measures to support the economy. The $30 trillion debt is equivalent to $231,000 per US household and $90,000 per person, according to the Peter G. Peterson Foundation. If every US household paid $1,000 per month toward covering the debt, it would take 19 years to pay down the sum. The staggering figure includes intragovernmental debt, or money the federal government owes to itself, such as through Social Security trust funds. It also includes debt held by public entities such as businesses, pension plans and insurance companies. More than $7.7 trillion is owed to foreign creditors, with Japan, China and the United Kingdom topping the list. The US government exceeded the $30 trillion threshold much faster than expected. In 2020, the nonpartisan Congressional Budget Office predicted it would not occur until 2025. Michael A. Peterson, CEO of the Peter G. Peterson Foundation – an organization dedicated to fiscal responsibility — described the $30 trillion milestone as a “giant red flag for all of us about America’s future economic health, generational equity, and role in the world.” “Our high and rising debt makes us less prepared for the next pandemic, less secure against future adversaries, less resilient to the changing climate, and less able to build the strong and inclusive economy that we all want for the next generation,” Peterson added. The national debt is a subject of fierce debate on Capitol Hill. Republicans – and some Democrats – have argued for months that President Biden’s $2 trillion social and climate spending bill, the Build Back Better Act, will cause the national debt to balloon even larger, crippling the country over the long term. In December, Democratic moderate Sen. Joe Manchin of West Virginia, a key holdout, cited the federal government’s “staggering debt” as a key factor in his decision to oppose the legislation. Last year, Republicans blocked efforts to lift the debt ceiling for months, citing concerns that raising the federal borrowing limit would facilitate additional government spending the country could ill-afford. Congress eventually reached an agreement to raise the debt ceiling by $2.5 trillion – an amount that’s expected to cover obligations through 2023.