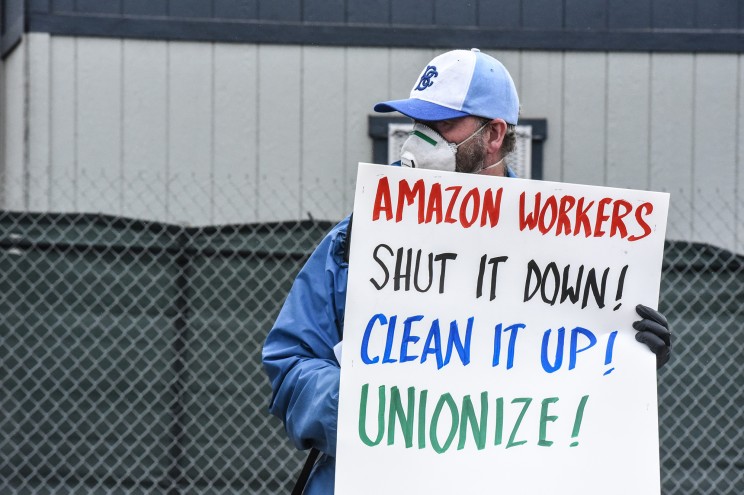 A group of Amazon warehouse workers on Staten Island have been approved to hold a vote on whether to form a union, a federal regulator said. Led by Chris Smalls, a former Amazon employee at that facility who was fired in 2020, the Amazon Labor Union won signatures from the required minimum of 30% of eligible workers to hold an election, the National Labor Relations Board said Wednesday. An NLRB spokeswoman on Thursday told The Post there was a “sufficient showing of interest” among the 5,000 employees at the so-called JFK8 facility in Staten Island, declining to comment further. Amazon didn’t immediately respond to a request for comment. In an earlier statement, the company cast doubt on the number of signatures Smalls had gathered. “We’re skeptical that there are a sufficient number of legitimate signatures and we’re seeking to understand how these signatures were verified. Our employees have always had a choice of whether or not to join a union,” spokesperson Kelly Nantel told news outlets in a statement. The development comes on the heels of a renewed organizing campaign in Bessemer, Ala., which is gearing up to win support to form a union after a failed attempt last year. That effort is being led by the Retail, Wholesale and Department Store union, while the Staten Island initiative is not affiliated with an official labor group. The NLRB ordered a new vote in Bessemer after the RWDSU challenged the voting results, accusing Amazon of intimidating its workers and interfering with the campaign. Amazon denied the allegations. Nevertheless, workers in Alabama will get the opportunity to cast new ballots by March. The NLRB has scheduled a formal hearing on the Staten Island initiative on Feb. 16. Some Amazon workers are unionized in Europe, but thus far the company has fought off such efforts in the US. Smalls, for his part, was fired after complaining about COVID-19 safety-related issues at the facility. Amazon said he violated the company’s safety protocols, but the matter is playing out in court now with New York Attorney General Letitia James arguing that Amazon should rehire Smalls. James said Amazon “unlawfully fired and disciplined workers who reported their concerns about the company’s compliance” regarding COVID-19 safety protocols.