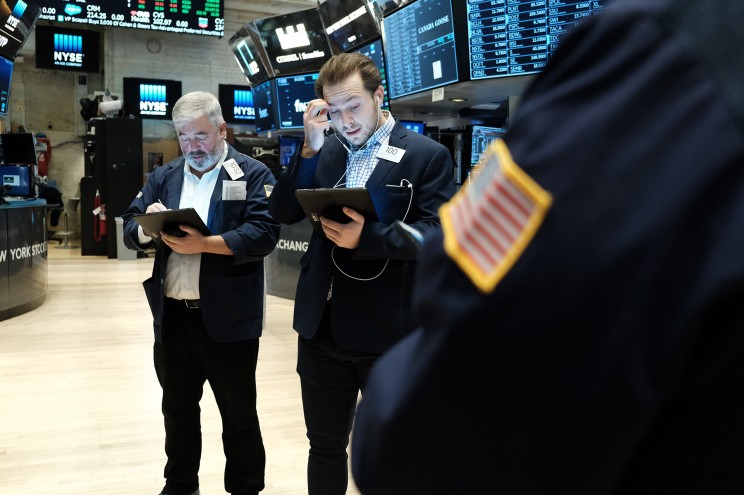 Stock futures plummeted and oil approached $100 per barrel on Thursday morning as investors reacted to the Russian invasion of Ukraine – a conflict that’s already considered one of the biggest geopolitical crises since the end of World War II. Dow futures fell nearly 800 points, or more than 2.4%, as Russian ground forces poured over the border and aerial bombardments struck Ukraine’s cities and military bases. The key index is poised to enter correction territory, defined as a 10% decline from its recent high on Jan. 4. S&P 500 futures were down about 2.4%, while futures tied to the tech-heavy Nasdaq index sank more than 3%. The Russia-Ukraine conflict has exacerbated fears of a global energy crisis in the days ahead, even as Americans are already paying steep prices at the pump. US benchmark oil prices surged more than 7% to nearly $100 per barrel. Meanwhile, Brent crude oil prices exceeded $100 per barrel in London for the first time since 2014. The CBOE Volatility index, tracked as a measure of investor anxiety and known as Wall Street’s “fear gauge,” surged as high as 37.00, its highest since Jan. 26. The beginning of hostilities also roiled the cryptocurrency market. Bitcoin declined more than 9% to approximately $35,307, while Ethereum and Solana each fell 13%. “Sentiment, broadly, is in the dumps,” Craig Erlam, senior market analyst at OANDA, told Reuters. “It’s not a shock response because this has been building for weeks but really it is the realization that diplomacy has failed.” President Biden and other Western leaders have vowed to response to a full-fledged Russian military operation against Ukraine with crippling sanctions. NATO Secretary-General Jens Stoltenberg decried Russia’s incursion as a “brutal act of war.” The US and other nations implemented initial sanctions on Russia after Putin recognized two breakaway pro-Moscow regions of Ukraine as independent. Earlier this week, Goldman Sachs analysts warned an escalated military conflict and resulting sanctions could cause the S&P 500 to plummet 6% from last Friday’s close. Shares of major US banks, including JPMorgan Chase, Bank of America and Goldman Sachs, pointed lower ahead of the opening bell. Meanwhile, defense stocks, including Lockheed Martin and Raytheon, were trading higher. Investors will be tracking whether the Russia-Ukraine conflict impacts the Federal Reserve’s plans to tighten monetary policy as it looks to cool surging inflation. The central bank is expected to hike interest rates for the first time in three years in March. With Post wires