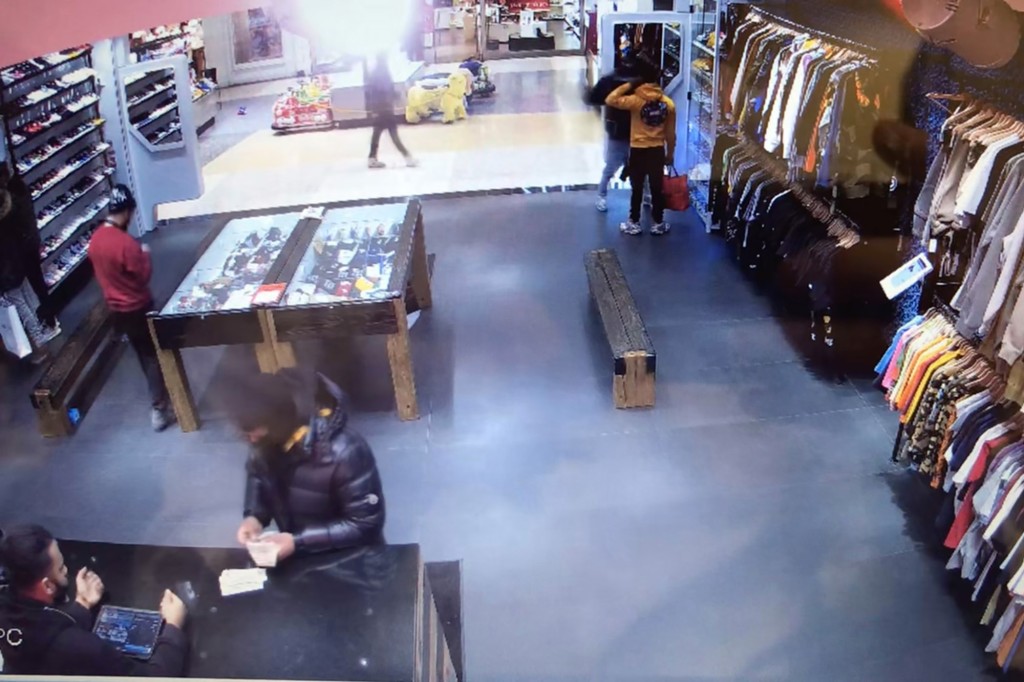 Surveillance video captured the moment a gunman opened fire and struck two teens inside a busy Brooklyn mall on Monday. The footage of the shooting obtained by The Post begins with the 19-year-old shooting suspect Timothy Briggs shelling out cash at the front counter of a sneaker shop inside Kings Plaza Shopping Center as two other suspects are confronted by a group of six young men near the store’s entrance. Briggs then turns away from the counter and looks toward the young men gathered near the front of the store – all the while keeping his right hand tucked inside a dark puffy jacket, the video shows. After one of the two other suspects — a man wearing a yellow sweatshirt — walks away from the six rivals, Briggs can be seen allegedly pulling out a gun and firing off several rounds. The group of six immediately fled for safety with the three suspects close behind. Police have said 10 shots were fired during the midday melee. Two teen boys, 14 and 16, were hit by the hail of bullets. They were hospitalized in stable condition. The framing in the walls of the store prevented the bullets from striking passersby outside the shop, sources said. Briggs and the two other suspects, Jaheim Covington, 19, Omarion Harvey, 18, were all arrested and charged in connection to the shooting. Sources said the trio are known gang members. Of the three, Briggs is facing the most serious charges. He was hit with two counts each of attempted murder, assault, criminal possession of a loaded firearm, criminal use of a firearm and four counts of reckless endangerment. Covington was charged with criminal possession of a loaded firearm, reckless endangerment, criminal possession of a firearm and possession of a large-capacity ammo feeding device, cops said. Harvey was charged with reckless endangerment and disorderly conduct, police said.