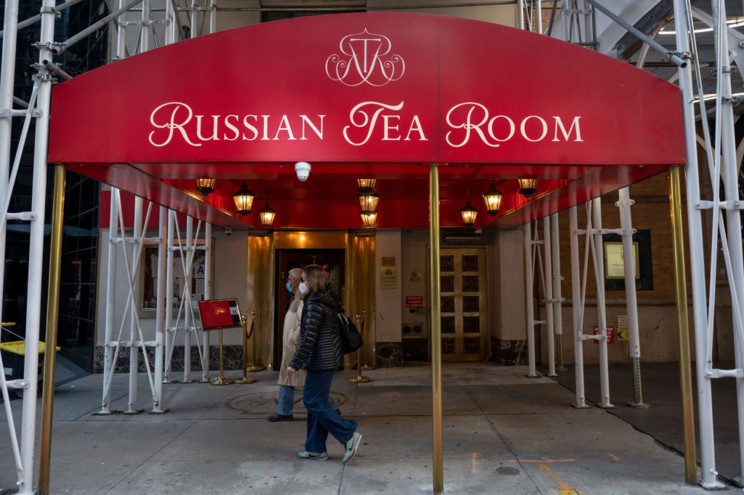 As the war in Ukraine escalates, customer traffic is drying up at the Russian Tea Room. The opulent eatery on West 57th Street in Midtown Manhattan — a mecca in its heyday for A-listers like Frank Sinatra, Raquel Welch and Liza Minelli — stood nearly empty on Tuesday. Over three hours at lunchtime, a mere 16 customers filtered in and out of the restaurant’s lavishly decorated dining room, famously outfitted with red banquettes, ornate samovars and old paintings on the walls. At the height of the lunch hour, a table of eight was outnumbered by twice as many staff. Those who showed up for their Tuesday shifts declined to comment on how they were weathering anti-Russian sentiments. That’s despite the fact that the 95-year-old restaurant on Monday posted a statement on its website and social-media accounts that condemned Russia’s invasion of Ukraine. “For 95 years, the NY institution’s history has been deeply rooted in speaking against communist dictatorship and for democracy,” the statement read. “Just as the original founders, Soviet defectors who were displaced by the revolution, stood against Stalin’s Soviet Union, we stand against [Russian President Vladimir] Putin and with the people of Ukraine.” The desolate scene stood in contrast to mobbed Ukrainian eateries in the city including East Village diner Veselka, which saw more than 100 customers stand in line for a table on Saturday. At least one Twitter user claimed the restaurant had received “death threats” and others told The Post that the staff has been harassed online. On its Instagram page there were pointed posts about Putin and the war, including “what about the war you started? Got nothin to say?” The century-old business was founded by the Russian Imperial Ballet as a gathering spot for expats before it became a posh hangout for entertainers in the 1950s. In recent decades it has largely become a tourist destination. The Russian Tea Room is celebrating it’s 95th anniversary this year, hoping to excite diners with a caviar and champagne anniversary menu for $275 and possibly a memento of the evening like the $30 to $600 Faberge and hand blown eggs for sale in a souvenir case. The current owners of The Russian Tea Room are real estate investors, RTR Funding Group, who bought the business and building in 2004 for $19 million. RTR president Gerald Lieblich did not return calls for comment.