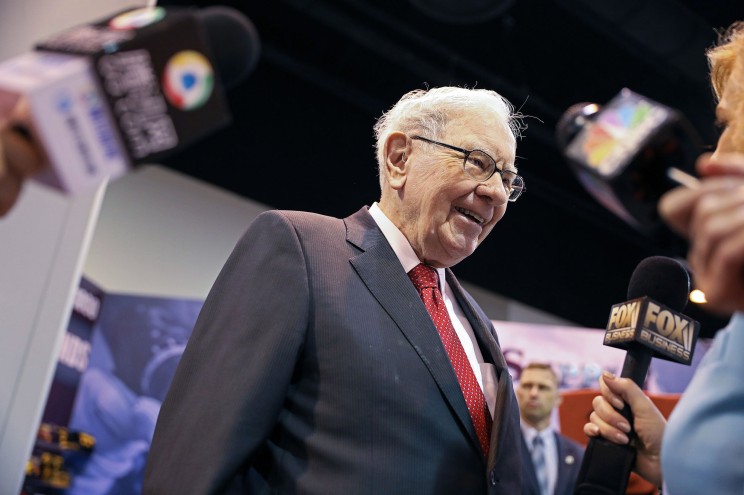 Warren Buffett’s Berkshire Hathaway on Monday struck an agreement to buy insurance company Alleghany Corp. for $11.6 billion, only weeks after the 91-year-old billionaire bemoaned a lack of good investment opportunities. Alleghany, the owner of reinsurer Transatlantic Holdings, would expand Berkshire’s large portfolio of insurers, which includes auto insurer Geico, reinsurer General Re and a unit that insures against major catastrophes and unusual risks. “Berkshire will be the perfect permanent home for Alleghany, a company that I have closely observed for 60 years,” said Buffett, who has run Berkshire since 1965, in a statement. The acquisition, one of the five largest in Berkshire’s history, would reunite Buffett with Joseph Brandon, who led General Re from 2001 to 2008 and became Alleghany’s chief executive in December. It would also end Buffett’s six-year drought of large acquisitions and help him to deploy some of the $146.7 billion of cash and equivalents his conglomerate had at the end of last year. In his Feb. 26 annual shareholder letter, Buffett lamented that “internal opportunities deliver far better returns than acquisitions” and that little “excites us” in equity markets. He pledged to keep $30 billion of cash on hand. Cathy Seifert, an analyst at CFRA Research in New York, said the merger should offer no surprises, reflecting Buffett’s familiarity with Alleghany and Brandon. see also “Berkshire has been under pressure to do a deal, and this may be the path of least resistance, though Alleghany will be a positive addition,” she said. “In terms of its business model and culture, this is a very strong fit.” Berkshire agreed to pay $848.02 in cash per Alleghany share, representing a 25% premium over Friday’s closing price. Alleghany would operate as an independent unit of Berkshire, which is based in Omaha, Neb. In afternoon trade, Alleghany rose 24.7% to $844.15. ‘Mini-Berkshire’ The transaction is expected to close in the fourth quarter, pending regulatory and Alleghany shareholder approvals. Alleghany has a 25-day “go-shop” period to find a better offer. Berkshire is known for its refusal to engage in bidding wars for whole companies. Insurance typically generates more than 20% of operating profit at Berkshire, the broader portfolio of which also includes the BNSF railroad, Berkshire Hathaway Energy and Dairy Queen ice cream. Berkshire also invests hundreds of billions of dollars in stocks such as Apple and has this year invested more than $6.4 billion in Occidental Petroleum. New York-based Alleghany was founded in 1929 by railroad entrepreneurs Oris and Mantis Van Sweringen and was transformed into an insurance and investment operating company under Fred Morgan Kirby II’s leadership from 1967 to 1992. CFRA Research’s Seifert said that Alleghany has long held itself out as a “mini-Berkshire,” being an insurance conglomerate that redeploys some of its excess capital in other businesses. Buffett’s statement said that the companies had “many similarities” while Brandon said that Berkshire “epitomizes our long-term management philosophy.” Alleghany’s other units include RSUI Group, an underwriter of wholesale specialty insurance, and CapSpecialty, which provides specialist cover for small and medium-sized businesses. Its Alleghany Capital Corp. owns several non-insurance businesses, including companies that focus on industrial parts, machine tools, hotels, toys and funeral services.