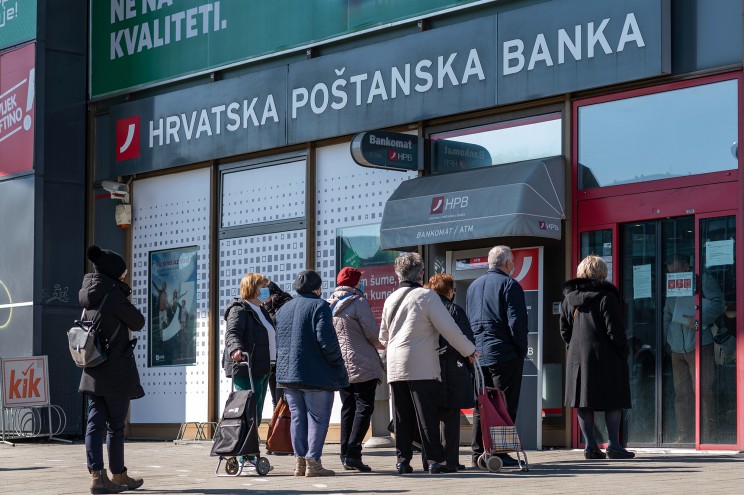 Russia is careening toward a debt default that will hurt its economy for years and cost investors a fortune following the Kremlin’s invasion of Ukraine — but its worst effects are unlikely to result in a global economic crisis, experts told The Post. The first major test of Russia’s ability to pay its debts will come Wednesday, when the country is due to make a $117 million interest payment on some of its bonds. The payment is supposed to be made in dollars — and the country has little access to the US currency after it’s been frozen out of global markets because of sanctions from the US, EU and others. “Russia has the money to service its debt, but cannot access it,” Kristalina Georgieva, head of the International Monetary Fund, said of the sanctions in a CBS interview over the weekend. If the country isn’t able to pony up the payment in dollars, it will likely be declared in default. Last week, ratings firm Fitch cut Russia’s grading further into “junk” territory and warned of an imminent default. The IMF, which monitors the global economy, has said it expects a “deep recession” in Russia following the international sanctions. Those sanctions — and the resulting recession — will mean everyday Russians will lose major purchasing power. Already, the ruble is worth less than 1 cent per dollar. But because Russia even without sanctions is relatively isolated from the global economy, a default won’t be a “systemic” risk like Greece’s debt default was in 2008 and 2009 as a financial crisis cascaded across Europe and eventually the rest of the world. As far as Russia, global banks’ exposure to the country is “definitely not systemically relevant,” the IMF said. William Jackson, chief emerging markets economist at Capital Economics, agreed, saying a default would be “symbolic,” but it wouldn’t have significant global ramifications. Still, although sanctions have frozen a large portion of Russia’s foreign currency reserves, the country’s finances are in good shape with low government debt, analysts say. When the government does need to borrow, its creditors are mostly domestic banks, not foreign investors who could abandon it in a crisis. Russia has 15 international bonds with a face value of around $40 billion outstanding, around half of them held by international investors. The government announced support this week for large companies deemed crucial to the economy. But the sanctions implemented against Russia, such as the ejection of some of Russia’s financial institutions from the SWIFT international payments system, have complicated international transactions. Russian Finance Minister Anton Siluanov said about $300 million of the country’s $640 billion in gold and foreign currency reserves are currently inaccessible. Jeffrey Roach, the chief economist for LPL Financial, told The Post that a Russian debt default wouldn’t be nearly as dramatic for the global economy as the crisis precipitated by Greece’s default. Roach said the key metric to watch is the so-called credit default swap market. Known as CDS, these are essentially an insurance policy someone takes out on a bond; if the borrower defaults, then the CDS can kick in. Investment bank JPMorgan estimates there are roughly $6 billion worth of outstanding CDS that would need to be paid out in the event of a Russian debt default. “Global risk contagion could increase if CDS settlements do not work seamlessly if Russian bonds default,” Roach said. If something gets gummed up in the system and debtors aren’t paid their CDS, that could trigger some issues globally. Economic analysts said the Russian invasion of Ukraine was not well thought out, particularly in light of the fact that the country’s last debt default took place after its invasion of Chechnya. “This upcoming default is deja vu,” said Sam Tabar, the CSO of Bit Digital and the former head of capital strategy at Merrill Lynch. After Russia bombarded Chechnya in the mid-1990s, its economy lost somewhere near 1.4% of its GDP. “You would think Russia would be gun-shy about military adventures given what happened last time it had one,” Tabar told The Post. A Russian external debt default seemed unthinkable with its international bonds trading above par until well into February. Harsh sanctions have changed all that and now bonds hover at distressed levels, some barely at a tenth of their face value. Most payments due — like the one on Wednesday — have a 30-day grace period during which Russia has time to make the payment. With Post wires