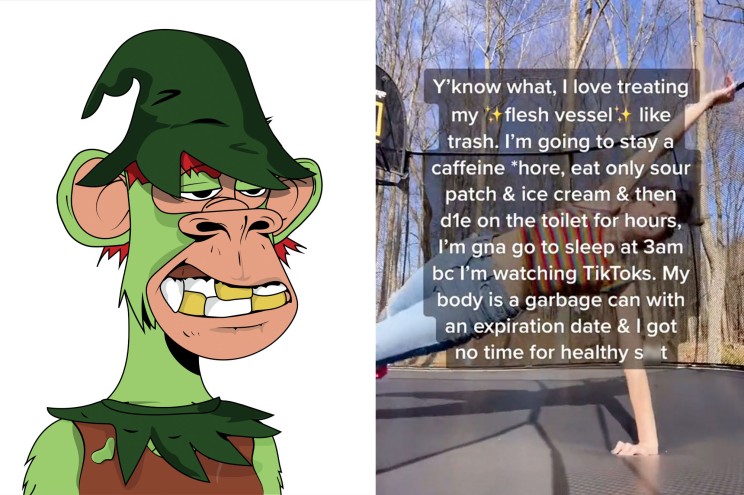 They’re slob goblins. With employees prepping to flock back to the office amid easing COVID restrictions, many are faced with the same dilemma — how to switch off “goblin mode” now that they’re around other people. Often associated with the coronavirus pandemic, the term entails a glorification of slothfulness and antisocial behavior. The phrase hit the zeitgeist during the pandemic-induced remote-work mandates, when hordes of self-isolators spent their time “goblin’” down snacks, forgoing makeup and showers, binge-watching Netflix and generally living like Ben Stiller at the end of “Dodgeball.” Now, two years into the pandemic, these habits born out of comfort have apparently become a way of life for many. “ ‘Goblin mode’ is like when you wake up at 2 a.m. and shuffle into the kitchen wearing nothing but a long T-shirt to make a weird snack, like melted cheese on saltines,” Dave McNamee, a self-proclaimed “real-life goblin,” said in summing up the phenomenon in an interview with the Guardian. “It’s about a complete lack of aesthetic. Because why would a goblin care what they look like?” In other words, “goblin mode” — not to be confused with the randy sex position of the same name — is not so much an identity as it is a state of mind. Perhaps it’s not surprising that it takes its name from the uncivilized folklore imp with dirty nails and a mischievous disposition. First mentioned on Twitter in 2009, the term’s popularity skyrocketed in early February when a doctored headline incorrectly attributed a “goblin mode” quote to “Uncut Gems” actress Julia Fox, the Guardian reported. Since then, the hashtag has blown up on TikTok. “Goblin mode” vids have entailed a variety of pandemic behaviors, including hoarding items, eating frozen waffles straight out of the box sans syrup, and women filming zombie apocalyptic-seeming vlogs in their PJs without makeup. In February, McNamee tweeted a video of a cat using its paw to shovel cat food into its mouth. He captioned it: “When people say ‘goblin mode’ this is what they mean.” In some cases, the trend was taken literally: In one viral Reddit thread, a stir-crazy Redditor reportedly suggested that pandemic-era stress had reduced them to “crouch-walking” along with making “goblin noises” while searching for “trinkets.” The phenomenon has drawn parallels to “goblin core,” another quarantine activity in which bored, locked-down people would cosplay as elfin-eared fantasy baddies, among other orcish pursuits. Why has “goblin mode” become so in vogue during the pandemic? Peter Hayes — a Bay Area tech worker who told the Guardian he jokingly calls his friends goblins and vice versa — claimed that lockdown eliminated the “social pressure to follow norms,” therefore allowing the slovenly lifestyle to flourish. That came to a head in April 2020, when a TV anchor copped to appearing pantsless during remote broadcasts. “ ‘Goblin mode’ is kind of the opposite of trying to better yourself,” added Juniper, who didn’t disclose her last name to the Guardian. “I think that’s the kind of energy that we’re giving going into 2022 – everyone’s just kind of wild and insane right now.” However, like a phoenix rising from the Cheeto dust, people are faced with toggling off “goblin mode” in anticipation of their office return. see also In New York City, plastic surgeons have seen a spike in business as cosmetically-minded employees get work to go back to work. “Now that people are back in the office or in a hybrid form, they’re wanting Botox, fillers, lighter maintenance lasers and peels,” Dr. Robert Schwarcz, an Upper East Side plastic surgeon, told The Post, noting that he has seen a 30% uptick in business over the last six months. Dr. Mojgan Fajiram, a cosmetic dentist on the East Side, has seen a similar customer spike. “I’ve been in practice for 30 years — the last two years have been the most demanding we’ve ever had. People are willing to pay double, but I won’t allow it,” she told The Post. “I’ve seen so many executives now. They want to have a perfect smile.” Meanwhile, mental-health experts have outlined ways to help relearn social skills that may have atrophied during the lockdown, like sharing food with people, striking up conservations, telling jokes, engaging in physical activities together and other ways to exorcise their inner goblin.