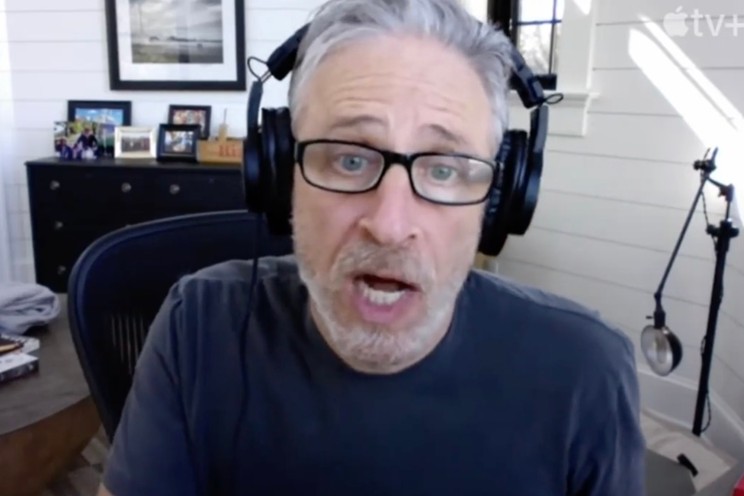 Jon Stewart is coming to the defense of fellow podcaster Joe Rogan over the uproar surrounding “misinformation” about vaccines that has prompted calls for Spotify to sever ties with its $100 million star. Stewart, the former star of Comedy Central’s Daily Show who is now hosting his own gabfest on Apple’s streaming service, said on Thursday that “canceling” Rogan would be akin to banning Stewart from television for his opposition to the Iraq War in 2003. “The New York Times, right, was a giant purveyor of misinformation, and disinformation,” Stewart said of the newspaper’s editorial support for the Iraq war. “And that’s as vaunted a media organization as you can find, but there was no accountability for them.” The Times and other mainstream news organizations were criticized for unquestioningly reporting the Bush administration’s claims that Saddam Hussein was developing weapons of mass destruction and that those efforts justified the US invasion. “These are shifting sands.” Jon Stewart makes such an excellent point here on Joe Rogan flap, one of the most important. “Who gets to decide” what’s considered “misinformation.” (Full clip: https://t.co/jsgy2T7PFv) via @mediaite @leia_idliby pic.twitter.com/pHiuAGxDrA— Caleb Howe (@CalebHowe) February 10, 2022 No such weapons were ever found in Iraq after American troops removed Hussein from power and installed a friendly government in Baghdad. Stewart said on Thursday that while he was “very vocal” in opposing the Iraq War in 2003, he was in the minority. “Couldn’t I have gone down and fallen down this — if Viacom or Comedy Central had wanted to censor me — or had wanted to take me off the — look, I’m not owed a platform. Nobody is,” he said. Stewart then added: “But my point is, these are shifting sands, and I think I get concerned with, well, who gets to decide?” Rogan hit out at mainstream media outlets such as CNN on Thursday, calling them “dishonest” for their portrayal of his podcast. The host of “The Joe Rogan Experience” called out CNN media reporter Brian Stelter and primetime host Don Lemon personally, saying: “Stop this editorial perspective with guys like Brian Stelter and Don Lemon that nobody listens to.” Rogan added: “Nobody is, like, chiming in saying, ‘Oh yeah, finally we get the voice of reason.’ Nobody thinks that.” Rogan has been at the center of controversy in recent weeks after rocker Neil Young pulled his music from Spotify to protest the podcaster’s show. Young and others have assailed Rogan for interviewing medical officials who have been accused of “spreading vaccine misinformation.” After Young pulled his content from the popular streaming platform, other artists like Joni Mitchell and India.Arie followed suit. Calls for Spotify to cut ties with Rogan intensified even further over the past week after viral videos on social media show the host uttering the N-word — though the clips were spliced in a way that decontextualized the comments. But Spotify’s CEO told staffers that while he condemned Rogan’s use of racial slurs, he had no plans to terminate the $100 million contract with the popular podcaster, who commands an audience of some 11 million listeners. Spotify tried to appease Rogan critics by culling more than 100 old episodes of the podcast from its platform.