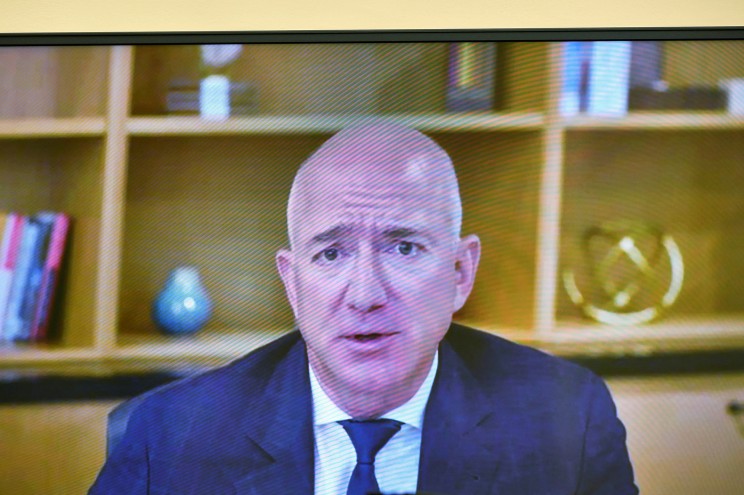 A key group of bipartisan lawmakers say Amazon’s top brass may have misled them under oath during an antitrust probe — and are calling on the Department of Justice to open an investigation into the company and its executives. Members of the House Judiciary Committee said in a Wednesday letter to Attorney General Merrick Garland that Amazon engaged in “misleading conduct” designed to “influence, obstruct, or impede” lawmakers’ investigation into whether the company used its e-commerce heft to squash competition. “Throughout the investigation and in follow-up inquiries, senior executives at Amazon engaged in a pattern and practice of misleading behavior before the Committee,” the group of lawmakers including Reps. Jerrold Nadler (D-NY), David Cicilline (D-RI) and Ken Buck (R-Colo.) said in a joint statement. “That is why we are referring this matter to the Department of Justice to investigate whether Amazon obstructed Congress or violated other federal laws.” The probe investigated accusations that Amazon used data from third party sellers to help develop its own private label products — a practice that Bezos said was against the company’s rules when he testified to Congress under oath in 2020 but that Reuters reported last year the company has engaged in. Lawmakers also questioned whether Amazon gave its own products an unfair leg up in search results. “There’s no factual basis for this, as demonstrated in the huge volume of information we’ve provided over several years of good faith cooperation with this investigation,” an Amazon spokesperson said. The Wall Street Journal first reported the news. The company has previously said that using third party data to develop its own products is forbidden and that the company investigates any potential misconduct. The Justice Department did not immediately respond to a request for comment. In October, the same group of legislators from House Judiciary Committee that signed Wednesday’s letter sent a letter to Amazon threatening to to ask the Justice Department to investigate Beozs and Amazon. “We strongly encourage you to make use of this opportunity to correct the record and provide the Committee with sworn, truthful, and accurate responses to this request as we consider whether a referral of this matter to the Department of Justice for criminal investigation is appropriate,” wrote the legislators, who also included Reps. Pramila Jayapal (D-Calif.) and Matt Gaetz (R-Fla.). But the lawmakers wrote on Wednesday that Amazon failed to comply with their requests. “The Committee extended multiple opportunities for Amazon to clarify these misconceptions, yet executives continued to thwart our efforts to uncover the truth about their business practices,” the legislators said. “Amazon and its executives must be held accountable for this behavior.”