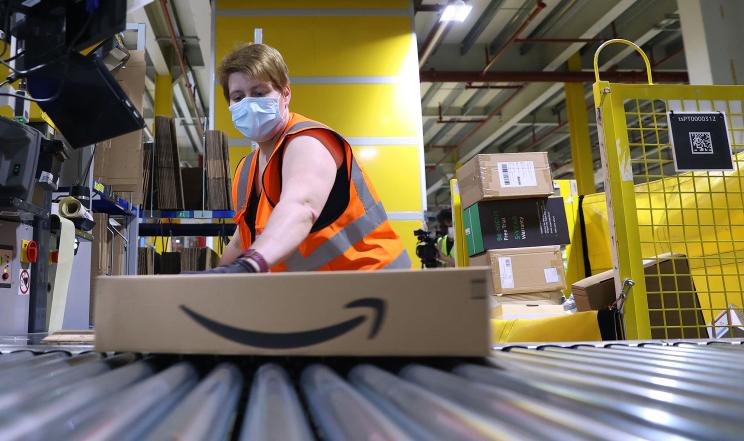 Amazon reportedly plans to recruit graduating high school students to staff its warehouses as it battles other companies for workers in an extremely tight labor market. The e-commerce giant will begin the hiring push next month – with company representatives set to tout Amazon’s perks and benefits at schools throughout the US and Canada. The push comes as a consortium of unions claimed that Amazon had a poor workplace safety record, which Amazon said in a statement to The Post it was working to improve. The company’s high school recruiting efforts will include appearances by Amazon recruiters at hundreds of high school career days and an emphasis on college tuition support offered to workers, The Information reported, citing a person briefed on the plan. Amazon and other companies are attempting to ramp up hiring as the economy reopens during the COVID-19 pandemic. But tight labor conditions have complicated the task, with US unemployment hovering at just 3.6%, according to the most recent jobs data. In March, there were more than 5 million more job openings than there were available workers to fill the roles. Amazon is competing with big-box retail rivals such as Walmart and Target, who are also boosting benefits to lure new workers. An Amazon representative told The Post that the effort to reach high school graduates was part of an ongoing initiative to recruit people to work for the giant. “Amazon is a stronger company because of the diversity of our workforce — our employees come from a variety of backgrounds and with varying levels of experience and education,” Amazon spokesperson Lisa Campos told The Post. “We’re always looking for great employees and this is one of many hiring efforts across the company,” The high school recruiting drive is the largest of its kind to date for Amazon – which paused similar efforts for the last two years due to safety concerns during the COVID-19 pandemic. Amazon hinted at its need to hire more workers in its fourth-quarter earnings release in February, with CEO Andy Jassy noting the company saw “higher costs driven by labor supply shortages and inflationary pressures” during the holiday quarter that were likely to continue in 2022. The latest recruiting drive will unfold as Amazon faces mounting pressure to improve its workplace practices. Earlier this month, workers at an Amazon warehouse in Staten Island became the first in company history to unionize following a lengthy organizing drive at the facility. The labor push succeeded despite strong opposition from Amazon, which has called for the election to be overturned. The effort also drew support from President Biden, who warned “Amazon, here we come” while backing the organizers. Meanwhile, injury rates at Amazon warehouses jumped by 20% in 2021 – despite pledges from company executives to improve safety measures at the facilities. Amazon accounts for approximately half of all warehouse injuries in the US, according to the Strategic Organizing Center. Amazon said in a statement to The Post that the company had hired tens of thousands of people to meet unforeseen demand that came from COVID-19. “Like other companies in the industry, we saw an increase in recordable injuries during this time from 2020 to 2021 as we trained so many new people — however, when you compare 2021 to 2019, our recordable injury rate declined more than 13% year over year,” said Kelly Nantel, another Amazon spokeswoman. Amazon employs more than 1.6 million around the world – a total that includes approximately 750,000 hourly workers in the US. Last month, the company revealed it was partnering with more than 140 colleges to offer fully-funded college tuition for its hourly employees. The company is aiming to convince high schoolers to work at their warehouses during summer break – then utilize the benefits to get a degree, even if they weren’t otherwise expecting to get into college. The e-commerce firm also raised its average hourly starting pay to $18 for warehouse workers last fall. Other benefits for full-time employees include medical, dental and vision coverage and a 401(k) with a 50% company match.