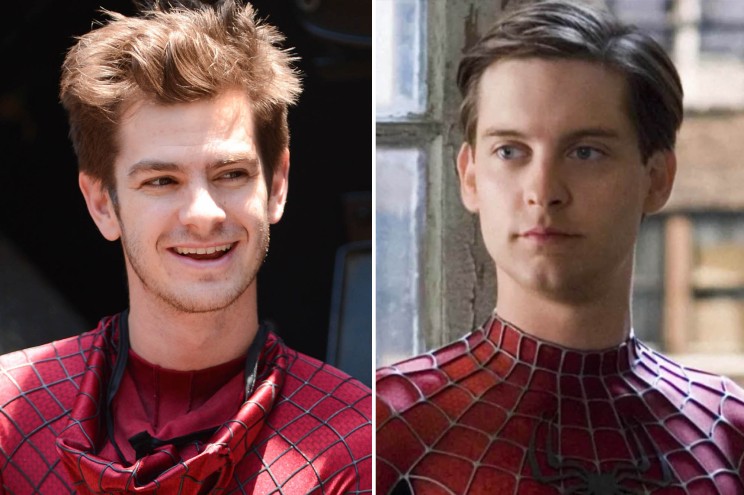 Andrew Garfield was living the high life in drama school. The “Eyes of Tammy Faye” actor, 38, divulged that he used to practice Tobey Maguire’s lines from “Spider-Man” while he was stoned during his school years. Garfield — who played an iteration of the Marvel superhero in 2012’s “The Amazing Spider-Man” — appeared recently on the “The Graham Norton Show” and he looked back on his younger days. “He’s my Spider-Man,” Garfield said of Maguire, 46. “I would practice his lines in the mirror when I was in drama school. “I was very high at the time.” The British actor added that his friend Terry McGinnis would “crack up” at the impressions. ”[He] would look at me like, ‘Yeah, you’ll never play Spider-Man, Andy.’ And then here we are,” Garfield laughed. Maguire played the role of Peter Parker/Spider-Man in Sam Raimi’s Sony trilogy released between 2002 and 2007. Garfield and the “Great Gatsby” actor slipped back into their superhero tights for the Marvel Cinematic Universe’s own spidey flick, “Spider-Man: No Way Home.” see also “I’m far too old to be playing Spider-Man now,” he told Norton. “But they asked me back and it’s the sweetest thing ever because I’d put that to bed. I was like, ‘I’m good, I’m done, that’s lovely.’ And Tom Holland is just the best, so I just kind of became a fan again.” The two teamed up with current Spider-Man actor Holland for the film in which the trio joined forces to take down the multiverse. In November, Garfield gushed to GQ that Maguire was his favorite because that’s “my childhood.” Garfield has had quite the year so far. He was recently nominated for Best Actor at the 2022 Oscars for his role as Jonathan Larson in Lin-Manuel Miranda’s “Tick, Tick…BOOM.” He showed off his singing chops in the musical based on the late “Rent” creator’s life and even expressed his desire to sing Will Smith’s 1997 hit “Miami” with him during the awards telecast next month. “I’ve watched the Oscars since I was a kid. Being involved in that way would be surreal, to understate it,” he told Variety on Feb. 9. “If it’s the right thing, it’s the right thing. The last time I sang before ‘Tick, Tick … Boom!’ was Will Smith’s ‘Welcome to Miami’ in karaoke. Maybe that’s the opening number. I know the lyrics by heart.” He added that with enough prep time he could “be confident enough to take a swing at something. Listen, I’m available. I’m open,” Garfield quipped in his pitch. The Oscars are set to air on March 27.