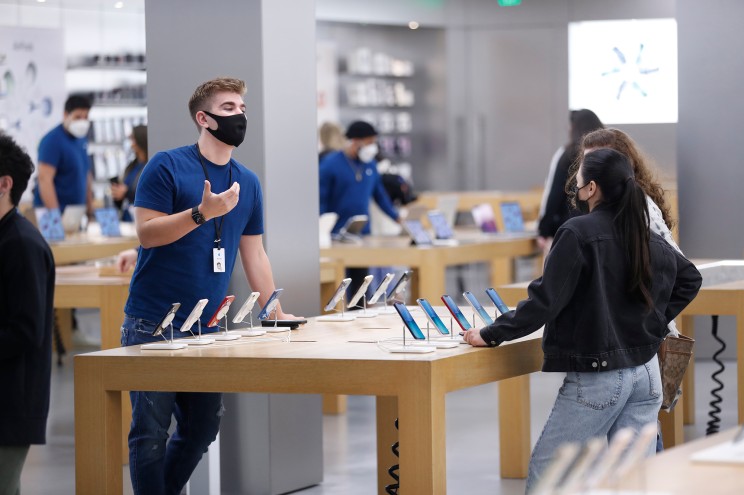 Some Apple retail workers who are participating in a unionization drive have reportedly ditched their iPhones in favor of Android-based phones out of fears company officials could track their communications. Workers at several Apple stores around the country are pushing to unionize, saying Apple’s compensation for retail workers – which ranges between $17 to more than $30 per hour and can include stock grants – has lagged behind inflation. As unionization talks have intensified, some workers have begun using phones using Google’s rival Android operating system to avoid potential spying by company officials, the Washington Post reported, citing sources familiar with the matter. Employees have also held secret meetings and communicated through encrypted messages, the report said. It’s unclear whether any specific incident prompted the employees to take those precautions. Apple did not immediately return a request for comment. So far, workers from at least two Apple stores have secured backing from national labor groups and are set to formally apply for representation with the National Labor Relations Board, according to the Washington Post. Several other stores are said to be involved in less advanced discussions about unionization. Apple employees at one store told the newspaper that managers have already begun efforts to dissuade them from forming a union, arguing it will actually hurt their inspirations for better wages and benefits. The employees claim managers have tried to eavesdrop on their conversations. Apple has sought to get ahead of the unionization movement by increasing pay, benefits and even one-time bonuses – though not enough to satisfy workers who want to organize. Earlier this month, the company confirmed it would offer more sick days and vacation time for its retail workers. The Apple workers reportedly drew inspiration from Starbucks employees who have organized in recent weeks. “I have a lot of co-workers and friends who I genuinely love and they do not make enough to get by,” one Apple retail worker involved in the union push told the Washington Post. “They’re struggling and they’re hurting and we work for a company that has the resources to make sure that they’re taken care of.” The Apple employees are seeking a greater share of profits during a period of strong sales growth for the tech giant. The company generated revenue of $378 billion in the last calendar year alone, up from $240 billion in 2017, and it has flirted with a $3 trillion valuation. The labor push is also occurring amid pushback over Apple CEO Tim Cook’s compensation. Activist investors are urging shareholders to vote against a proposed $99 million pay package for the executive.