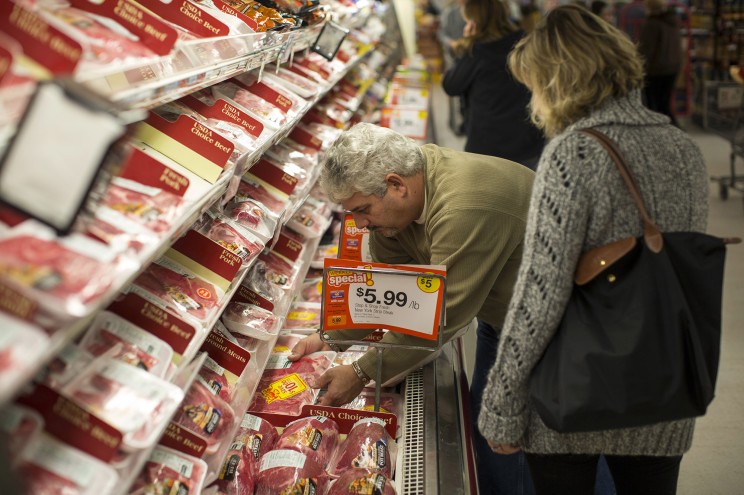 Families on a budget are paring back the red meat on their menus after beef prices have risen more than 16% since last year. Even as prices for red meat have begun to dip slightly from their pandemic highs, it’s too late for financially strapped consumers who have already made the switch to proteins like chicken, which is no bargain, either. Chicken breasts reached a 16-year high in February of $3.82 per pound, according to the Bureau of Labor Statistics. They’re also up around 13.2% since last year, but that compares to $11.65 a pound for sirloin steak or $4.63 a pound for ground beef. More families are swapping out burgers and steaks for chicken, say grocers and meat wholesalers, who have adjusted their purchasing as well. “We are seeing this shift to poultry in lower-income neighborhoods, where consumers who had more disposable income last year are now being more cautious about spending,” said Daniel Romanoff, president of Bronx-based meat wholesaler Nebraskaland. And the extra bite of inflation on other goods – on everything from gasoline to clothes – is taking an even bigger chunk out of food budgets as prices on everything are at a 40-year high, up 7.9% from last year, according to the latest federal data out Thursday. Morton Williams, which operates 16 stores in the New York metro area, is now purchasing 30 60-pound boxes of rib meat a week compared to 60 boxes a few months ago, Victor Colello, the grocer’s director of meat, told The Post. Throughout most of the pandemic demand for all things beef was strong despite historically high prices because consumers had more purchasing power, experts say. “Our chicken business shifted to beef last year and now in 2022 we are seeing the reverse,” Romanoff added. Rapidly rising inflation is taking a bite out of budgets and putting a crimp in what families can afford. Even Walmart, the largest and lowest-cost grocer in the US, has raised prices “dramatically,” according to Gordon Haskett analyst, Chuck Grom, who surveyed budget retailers across the country in late February and found that the average price increase at Walmart, Target and the dollar stores was 8.1%. In the fall of 2021, price increases at supermarkets were between 4% and 5%, “but all of a sudden that nearly doubled,” Grom said. At Walmart a dozen eggs cost $2.13 in February, up from $1.21 a year ago, while a box of DiGiorno pizza cost $5.94 in February — or 94 cents more than a year ago — and a gallon of milk cost $3.51, up from $2.82. “People got their pandemic checks last year, which helped them to buy more beef,” said Dean Baker, a senior economist with Center for Economic and Policy Research. Andrew Gottschalk, founder of HedgersEdge.com, which provides market research on the ag industry, said wholesale beef prices are starting to tick down from their sky-high prices, but that isn’t helping the budget-strapped consumer. “Lower-income households could afford to move up the protein ladder during the pandemic and that’s where we saw demand for beef improve, but now with inflation their real wage gains are being wiped out,” he said.