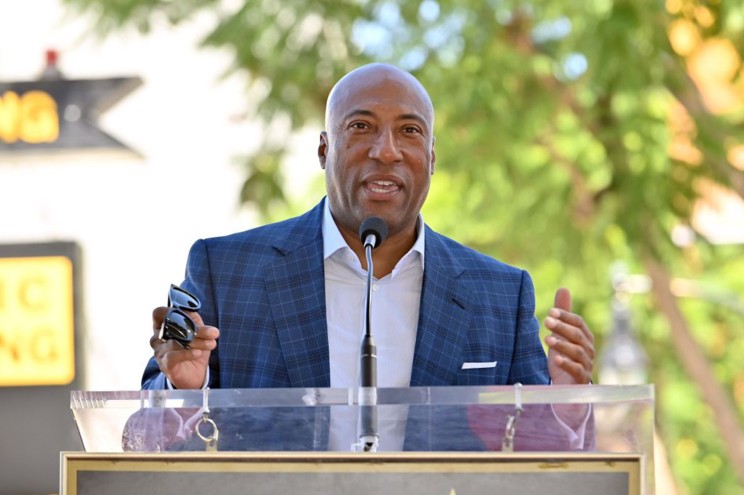 Byron Allen, the former comedian and television host who went on to build a billion-dollar media empire, will bid for a controlling stake in the Denver Broncos, potentially making him the first black principal owner in the National Football League. “NFL commissioner Roger Goodell and New England Patriots owner Robert Kraft came to me in November of 2019 and asked me to take a good look at buying an NFL team,” Allen, the CEO of Allen Media Group, told Bloomberg. “And after serious consideration, I strongly believe I can help effectuate positive changes throughout the league. “And for that reason, I will be making a bid for the Denver Broncos.” Allen is leading a group of investors who are expected to submit a bid in the $3 billion – $4 billion range, according to Bloomberg. The bid would easily surpass the most recent NFL team acquisition by David Tepper, who bought the Carolina Panthers for what was then a record $2.2 billion in 2018. The national record for most ever paid by a businessman to own a professional sports franchise was set by Joseph Tsai, who purchased the Brooklyn Nets in 2017 for $2.3 billion. The Allen-led team, which will include investors from business, Hollywood, sports, and Wall Street, has retained the services of Allen & Co., a boutique investment bank, to handle the transaction. Allen, 60, gained fame as a stand-up comedian. He appeared on NBC’s Tonight Show with Johnny Carson. He then ventured into business, founding Allen Media, whose holdings include The Weather Channel and more than two dozen local television stations. Allen will have stiff competition in his quest to acquire the Broncos — particularly from two of the team’s former legends. John Elway and Peyton Manning, the retired quarterbacks who led the team to Super Bowl victories during their playing days, are expected to make separate bids. The NFL has been harshly criticized in recent weeks for its lack of African-American representation in upper management positions and the coaching ranks — even while more than 70% of the players are black. The league has just one African-American head coach — Pittsburgh Steelers head man Mike Tomlin. Brian Flores, who was fired as head coach of the Miami Dolphins despite leading the team to a winning season, filed a lawsuit against the league accusing its owners and senior management officials, including Elway, of denying him a job opportunity due to his race. It has also been reported that NFL owners are urging Robert F. Smith, a Denver native and the billionaire founder of Black Entertainment Television, to also make a bid for the Broncos.