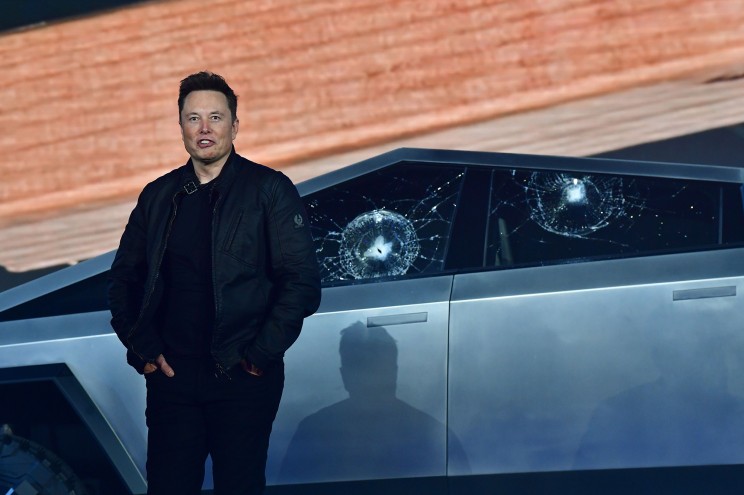 The launch of Tesla’s Cybertruck and two other upcoming vehicle models have been delayed until at least 2023 because of continued supply-chain bottlenecks, CEO Elon Musk said. In addition to the tank-like Cybertruck, which was first unveiled in 2019, Tesla is pushing back the release of its electric Semi eighteen-wheeler and Roadster sports car until at least next year, Musk told investors during the automaker’s earnings call on Wednesday. Musk also said that Tesla is pushing back development of its $25,000 car, which the company first announced in 2020 in an effort to make its vehicles more accessible to the masses. “Well, we’re not currently working on a $25,000 car,” Musk said. “At some point, we will, but we have enough on our plate right now, too much on our plate, frankly. So, at some point, there will be.” Musk added that asking about the $25,000 vehicle is “sort of the wrong question” because Tesla is so focused on creating self-driving vehicles. “Really, it’s really the thing that overwhelmingly matters, is when is the car autonomous?” Musk said. “Everything pales in comparison to the value of robotaxi or personal driving.” The delay also affects Tesla’s humanoid “Optimus” robot — which has so far been teased publicly as just an actor in a bodysuit. see also Musk said the delays are due to supply chain and manufacturing constraints — and that the company would instead be focusing on ramping up production of its current vehicle offerings. “We will not be introducing new vehicle models this year,” Musk said. “It would not make any sense because we’ll still be parts constrained. We will, however, do a lot of engineering and tooling and whatnot to create those vehicles — Cybertruck, Semi, Roadster, Optimus, and be ready to bring those to production hopefully next year. That is most likely.” Musk made the comments during Tesla’s earnings call on Wednesday evening. The company reported record revenue and deliveries during the fourth quarter of 2021. But shares the world’s most valuable automaker nonetheless dipped following the report as Tesla warned that supply chain constraints were set to snarl production through the end of 2022.