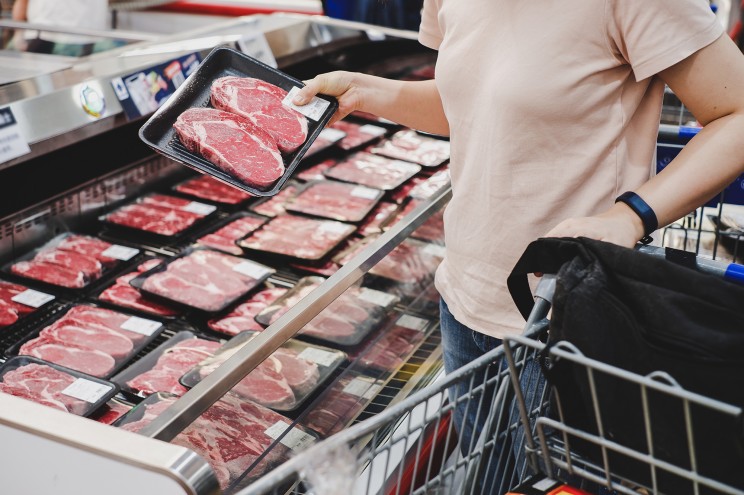 Grocery shopping has commanded a large share of Americans’ disposable income over the last year — and relief may be hard to come by in the months ahead as businesses raise prices even higher. US households were spending more than 12% of their disposable income on food purchases as of the end of 2021, according to data from the Bureau of Economic Analysis. That’s up from 10.8% at the end of 2020 — and it marked the highest share of food spending in more than two decades. The price hikes for proteins have been especially steep. As of January, the cost of beef and veal was 16% higher than it was in the same month one year earlier. Pork prices are up 14.1%, while eggs are up 13.1%, fish and seafood 12.7% and chicken up 10.3%. Even basic staples like cooking oils and flour are up by double-digit amounts year-over-year. Overall, inflation reached a four-decade high of 7.5% in January, according to the latest Consumer Price Index. As noted by Bloomberg Businessweek, which compiled the data, steep food costs could linger even after supply chain bottlenecks have cleared. Businesses are paying higher prices for every aspect of their operations, from commodities needed to produce and ship their goods to hiring and labor expenses. The national average price for a gallon of gasoline was about $3.53 as of Friday, up from approximately $2.58 one year ago. Countless restaurant chains and food companies have already passed their higher costs along to consumers — with many planning additional price hikes this year. Meanwhile, the Federal Reserve is expected to pursue an aggressive slate of interest rate hikes in a bid to tame inflation. Earlier this week, Wingstop executives said the chain’s chicken wing costs rose 41% over the last year alone — a trend they described as “record-high wing inflation.” McDonald’s and Starbucks are among the major chains plotting price hikes this year.