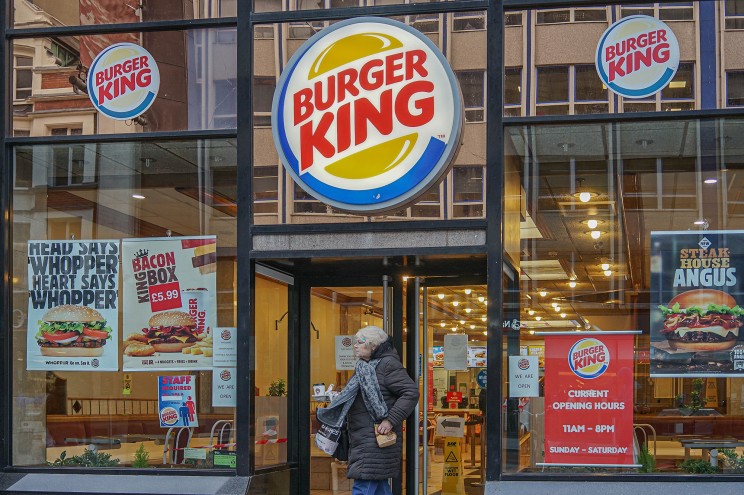 Burger King’s largest franchisee, Carrols Restaurant Group, revealed that the fast-food giant has reduced the number of chicken nuggets in its meals from 10 pieces to eight, in order to “limit the impact of higher input costs and help improve restaurant-level profitability.” “The Burger King brand has about a dozen menu and promotional initiatives, some of which have already been implemented and some that will be implemented over the course of this year,” Carrols Restaurant Group CEO Dan Accordino said Thursday on the company’s fourth-quarter earnings call. “Recent actions in this regard from our franchisor include lifting price caps on value menu items and reducing the number of nuggets in meals from 10 pieces to eight.” Carrols, which operates 14% of Burger King’s 7,000 locations in the U.S., said its comparable Burger King restaurant sales rose 7.4% during the quarter. Eat-in and takeout channels contributed about 14% in combined total sales at the company’s Burger King restaurants, while drive-thru accounted for approximately 80% of total sales. “In Q3 of 2021, we reduced our nugget count from 10-piece to 8-piece — the first shift in piece count since inception — to allow for exciting innovation in this space with Ghost Pepper Nuggets,” a Burger King spokesperson told FOX Business. “Moving forward, we’ll continue to innovate on nuggets, offering guests both a competitive price and differentiated product not found anywhere else.” In addition to cutting the number of nuggets per meal, Burger King’s Whopper has been removed as a core discount item and is no longer available on the 2 for $6 or 2 for $5 promotions, which Accordino said has been “one of the most impactful initiatives underway.” Burger King, which made news last year when it announced it would donate a portion of Ch’King sandwich sales to an LGBTQ charity, isn’t the only restaurant adjusting its menu items to combat higher costs. Domino’s Pizza said it would reduce the number of wings in its $7.99 carryout deal to eight pieces from 10. Other restaurants taking a hit from inflation include Wingstop, which said that costs for its bone-in chicken wings rose 27.5% year over year in the fourth quarter and a record 40.9% year over year for fiscal year 2021, and Little Caesar’s, which said it would bump up the price of its famous Hot-N-Ready pizza by 11% to $5.55. In other Burger King news, the chain recently released its Big King burger.