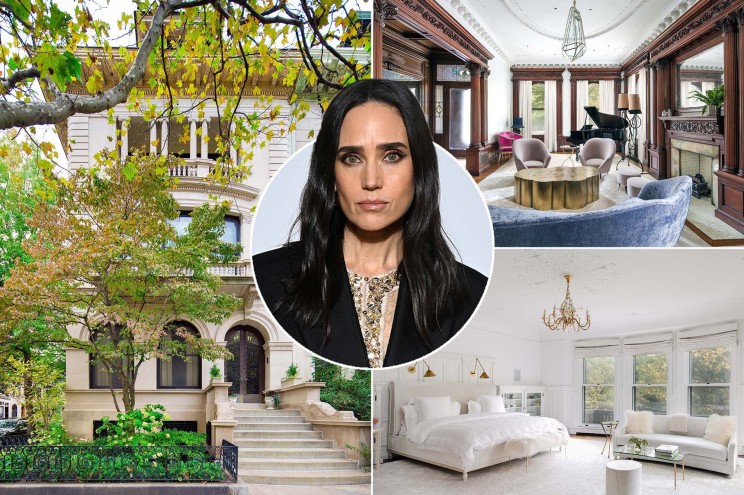 We bet Julian Fellowes’ new hit HBO show “The Gilded Age” doesn’t go to Brooklyn. But Gilded Age mansion lovers absolutely should. A 25-foot-wide mansion built in 1899 that was once home to Oscar-winning actress Jennifer Connelly is now in contract. It was last asking $12.2 million — which is less than what the sellers paid in 2015. The limestone residence at 17 Prospect Park West was designed by architect Montrose W. Morris and has 6,500 square feet of space. It has seven bedrooms, three bathrooms and artistocratic details such as stained glass windows, mahogany columns, carved mantels, coffered ceilings, carved wood, five working gas fireplaces and herringbone floors. There’s also a chef’s kitchen with a butler’s pantry and a dumbwaiter, a formal dining room and a 600-bottle wine cellar under the front stoop. Additional details include a corner living room overlooking the park that’s anchored by a gas fireplace with an onyx mantel. The main bedroom, which takes up a whole floor, comes with soundproof windows and a maple dressing room with stained glass and a marble counter. There’s also a children’s floor with a library, complete with original casement windows and a cushioned bench. Outdoor space boasts a roof deck, balcony and garden. Connelly — of “A Beautiful Mind,” “Requiem for a Dream” and “Snowpiercer” — and her husband, Marvel-man actor Paul Bettany, of “WandaVision,” bought the home for $3.7 million in 2003 and sold it for $8.45 milltion to a Google exec in 2008. It then sold for $12.4 million to a family trust linked to Apollo Global Management, who first listed it for $12.9 million in 2018. The listing broker is Douglas Elliman’s Lindsay Barton Barrett.