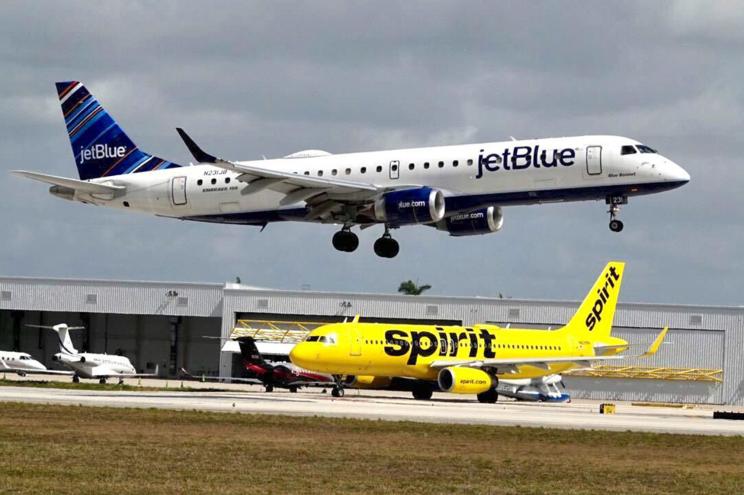 JetBlue is going hostile in its bid for Spirit Airlines and asking shareholders of the low-cost carrier to reject a proposed $2.9 billion acquisition by Frontier Airlines. JetBlue, in going straight to shareholders with its offer Monday, wants to push Spirit’s board to the negotiating table. Shares of Spirit, based in Miramar, Florida, jumped 13% in midday trading. JetBlue pitched a new offer of $30 per share in cash to Spirit stockholders but said its previous offer of $33 per share is still available if Spirit enters negotiations. Spirit’s board rejected JetBlue’s $3.6 billion offer on May 2, saying antitrust regulators are unlikely to approve an offer from the New York City airline largely because of its alliance with American Airlines in the Northeast. The Justice Department is suing to block that deal. Shareholders of Spirit Airlines are scheduled to vote June 10 on the Frontier bid favored unanimously by the Spirit board. JetBlue said Monday that Frontier’s offer is high risk and low value. It made its initial buyout bid for Spirit on April 5, offering $33 per share in cash. JetBlue said Monday that the new, lower offer is based on Spirit’s unwillingness to share information that JetBlue requested. see also “The Spirit Board failed to provide us the necessary diligence information it had provided Frontier and then summarily rejected our proposal, which addressed its regulatory concerns, without asking us even a single question about it,” JetBlue CEO Robin Hayes wrote in a letter. “The Spirit Board based its rejection on unsupportable claims that are easily refuted.” Hayes said JetBlue is offering a significant premium in cash, more certainty, and more benefits for all Spirit investors. He said JetBlue is confident of winning regulatory approval. The bid from Frontier Group Holdings provides less cash but would let Spirit shareholders keep 48.5% of the combined airline. It would give Spirit shareholders 1.9126 shares of Frontier plus $2.13 in cash for each Spirit share. Either combination involving Spirit would create the nation’s fifth-biggest airline behind American, Delta, United and Southwest. Frontier and Spirit are similar airlines that offer low fares and get more revenue from tacking on fees for many things. JetBlue is more like the big airlines it hopes to catch. It generally charges higher fares than the discount airlines, but it provides more space between rows and adds amenities including free TV. Shares of JetBlue fell 4% while shares of Frontier, based in Denver, climbed more than 6%.