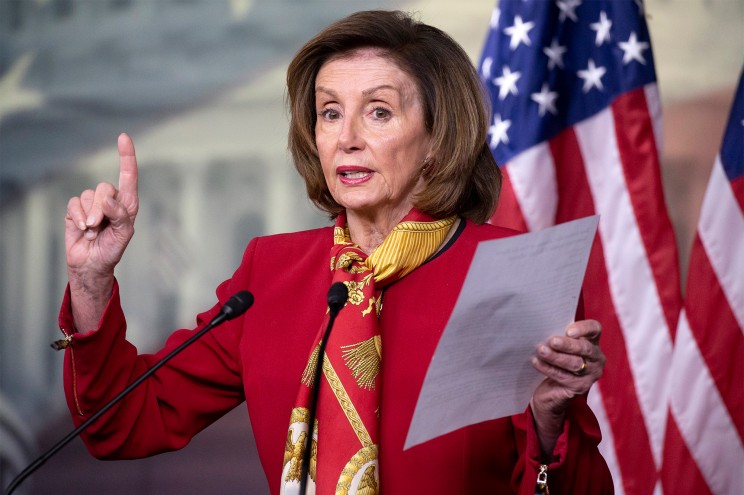 House Majority Leader Nancy Pelosi — whose husband has made up to $30 million trading shares of Big Tech companies — waffled when asked about a potential ban on stock trading by members of Congress and their spouses, saying, “It’s complicated.” “What matters to me is what my members think,” Pelosi (D-Calif.) told reporters at a Wednesday press conference when asked about several proposed bills that would ban the practice. “I’m a big believer in our committees. And we’ve tasked the House administration committee to review the options that members are putting forth and they have different views on the subject.” “If that’s what the members want to do, then that’s what we will do,” she added. “It’s complicated and members will figure it out and then we will go forward with what the consensus is.” The House speaker’s wishy-washy comments come as support builds on both sides of the aisle for banning members of Congress and their spouses from trading individual stocks. Sens. Elizabeth Warren (D-Mass.) and Steve Daines (R-Mont.) plan to introduce a bill soon that would ban lawmakers and their spouses from owning or trading individual stocks, sources told The Post on Wednesday. That comes in addition to a Senate bill from Sens. Jon Ossoff (D-Ga.) and Mark Kelly (D-Ariz.) that would ban lawmakers from trading stocks while in office and require them to put the assets in a blind trust. The Ossoff-Kelly bill, which was first reported by The Post in January, has the backing of at least eight other Senate Democrats — and a nearly identical House measure being pushed by bipartisan lawmakers including Reps. Chip Roy (R-Texas) and Abigail Spanberger (D-Va.) is also gaining steam, attracting the support of 35 Democratic and 10 Republican members of Congress. On Wednesday morning, Spanberger appeared to be losing patience with Pelosi. see also “I’m not sure why there has to be this new effort to review what’s possible,” Spanberger told an Insider reporter in reaction to news that Pelosi had asked members to review different stock trading proposals. “We’ve got a bill that, day by day, gets more and more co-sponsors, Democrats and Republicans.” “I hope it’s not so that we can spend a lot of time talking about this issue without actually doing something,” Spanberger added. “If we wanted to take action, we would put the most bipartisan bill … forth.” Among other party leaders, Senate Majority Leader Chuck Schumer (D-NY) and House Minority Leader Kevin McCarthy (R-Calif.) have also said they would potentially support a ban but have not thrown their weight behind any particular bill. Senate Minority Leader Mitch McConnell (R-Ky.) has been noncommittal. During Pelosi’s press conference Wednesday, the speaker also pointed out that, while members of Congress are currently required to report stock trades within 45 days, members of the judiciary are not required to do the same. A Wall Street Journal investigation last year found that 131 federal judges have improperly overseen court cases involving companies in which they or their families owned stock. “The judiciary has no reporting,” Pelosi said. “It has to be government-wide.” Join me live at the U.S. Capitol for my weekly press conference. https://t.co/ak5LqFQ3Sn— Nancy Pelosi (@SpeakerPelosi) February 9, 2022 The San Francisco Democrat added that she supports heightening penalties for lawmakers who do not properly report stock trades under current rules. “We have to tighten the fines on those that violate the STOCK Act,” she said in reference to the 2012 law requiring disclosure of stock trades. In December, Pelosi took flak for saying she opposed a ban on stock trades by members of Congress, defending the practice as part of the “free market.”