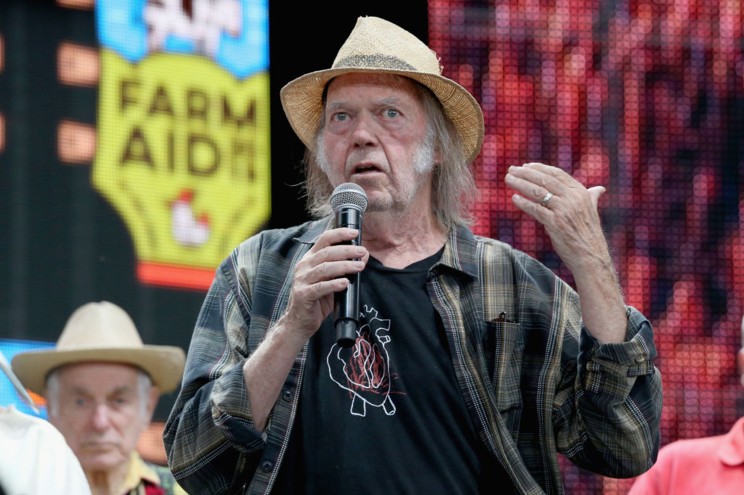 Neil Young is offering fans a free subscription to Amazon Music as he and other musicians step up their campaign against streaming platform Spotify for hosting controversial podcaster Joe Rogan. Young encouraged fans “looking for my music” to sign up for Amazon’s streaming service, noting “all new listeners will get four months free.” The 76-year-old musician pulled his music from Spotify last week. “Amazon has been leading the pack in bringing Hi-Res audio to the masses, and it’s a great place to enjoy my entire catalog in the highest quality available,” Young tweeted. In a now-deleted letter viewed by Rolling Stone, Young argued the platform was “spreading fake information about vaccines” by hosting Rogan’s podcast. Young’s action prompted a renewed movement to boycott Spotify over its involvement with Rogan, with fellow musicians Joni Mitchell and longtime E Street Band guitarist Nils Lofgren among those who pulled their music. Prince Harry and Meghan Markle, who have a lucrative streaming deal with Spotify, have also said they have expressed “concerns” about COVID-19 misinformation on the platform. The pressure campaign has even weighed on the streaming company’s stock in recent days. Spotify shares plunged 12 percent last week, erasing more than $2 billion in market value. Rogan has been under intense scrutiny for months for allegedly spreading misinformation about the COVID-19 pandemic. The longtime comedian and podcaster’s deal with Spotify is worth more than $100 million. Criticism of Rogan intensified earlier this month after he interviewed Dr. Robert Malone, a virologist who was banned from Twitter over COVID-19 misinformation. In December, a group of 270 health experts called on Spotify to “establish a clear and public policy to moderate misinformation on its platform.” Rogan addressed the boycott movement in a lengthy video message to fans on Sunday night. “I’m not trying to promote misinformation, I’m not trying to be controversial,” Rogan said. “I’ve never tried to do anything with this podcast other than to just talk to people.” Rogan offered apologies to both Young and Spotify, noting that he would “do my best to try to balance out these more controversial viewpoints with other people’s perspectives” in the future. Spotify CEO Daniel Ek said the platform would add content advisories for podcasts that discuss COVID-19, though he noted the company also has an obligation to protect “creator expression.” “It is important to me that we don’t take on the position of being content censor while also making sure that there are rules in place and consequences for those who violate them,” Ek said.