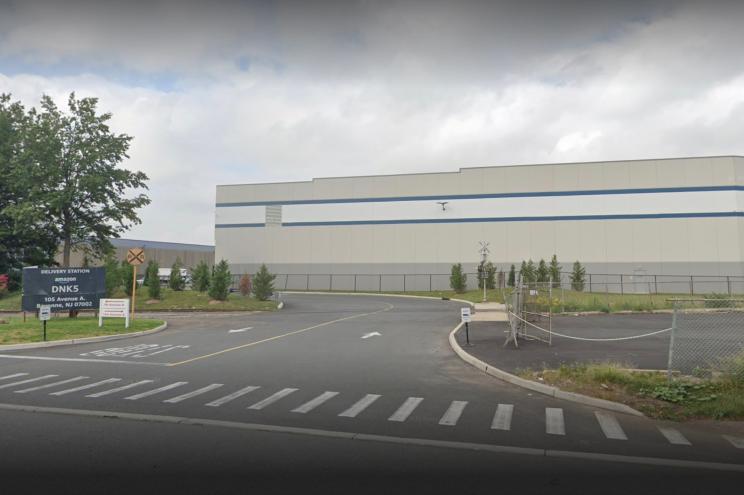 A labor group that has previously faced accusations of mob ties has filed for a union election at an Amazon facility in northern New Jersey. Local 713 of the International Brotherhood of Trade Unions sent a letter requesting a union election at an Amazon delivery station in Bayonne on Friday, National Labor Relations Board records show — just weeks after a nearby New York warehouse became the first in the country to unionize. The proposed Bayonne union would cover 200 workers at a fulfillment center on the Newark Bay that opened in 2020. NLRB spokesperson Kayla Blado told The Post on Monday that at least 30% of the eligible employees had signed union cards and that the agency is now working to schedule a union election. The IBOTU is not affiliated with the Amazon Labor Union, an upstart group led by current and former Amazon employees that earlier this month won the right to represent 8,300 workers at a Staten Island warehouse just minutes away from Bayonne. Instead, the Long Island-based group seeking to unionize the Bayonne facility describes itself as a labor union representing workers “across industries such as warehousing, supermarket, building services, bus driving, and manufacturing.” IBOTU has also been dogged by allegations of shady practices in the past. In 2012, federal prosecutors accused the group’s former secretary treasurer, Robert Scalza, of being an associate of the Genovese crime family. While Scalza was working for IBOTU, US Attorneys claimed in court docs that he had a Genovese capo threatened a rival trade union that was trying to unionize a Long Island chocolate factory, the New York Daily News reported. Scalza pleaded guilty to extortion conspiracy charges in 2014, according to the paper. He was reportedly sentenced to six months house arrest and required to give up any union job for at least three years. He appears to have returned to the union by 2019, earning a whopping $341,000 as a “key employee” that year, according to the group’s tax forms. Speaking to The Post on Monday, IBOTU attorney Steven Kern said Scalza was no longer with the union. “I remember the name, I know I must’ve done something with him in the past, 20 years or so ago” Kern said of Scalza. “So he did something wrong and he pled guilty and was convicted or whatever and he’s not with the union.” Scalza isn’t the only former union executive who’s been accused of corruption. In 2003, IBOTU’s then-president Peter Hasho was indicted for allegedly playing a role in a plot to steal $350,000 from a union welfare fund in Jersey City through a no-show job, the Associated Press reported. However, a jury later cleared Hasho in the case, court papers show. Before he worked as the union’s president, Hasho was also arrested and arraigned in 1975 in a separate alleged union bribery scheme, the New York Times reported, although the outcome from that case is unclear from available court archives. According to tax filings, Hasho recently served as the union’s “Pres Emeritus” and took home compensation worth more than $1 million in 2018 and $810,000 in 2019 before he died in September 2021. By comparison, the president of the National Education Association — the largest union in the United States — took home less than $400,000 in 2018. see also Asked whether ex-union officials’ records could scare off would-be Amazon union members, Kern said, “I can’t speak to specific accusations. I’m not even familiar with them.” Amazon spokesperson Paul Flaningan declined to comment. The Bayonne union filing comes just days before workers at a second Staten Island Amazon warehouse are set to decide whether to join the Amazon Labor Union. Asked if the Amazon Labor Union would be able to better represent the Bayonne facility, Kern said, “Anybody that can become the bargaining representative at an Amazon location should so.” “We don’t feel bad about it,” he added. “We’re doing what we can do. We didn’t take anything away from anybody.” The Amazon Labor Union did not immediately respond to a request for comment. News of the Bayonne union filing was earlier reported by journalist Jonah Furman.