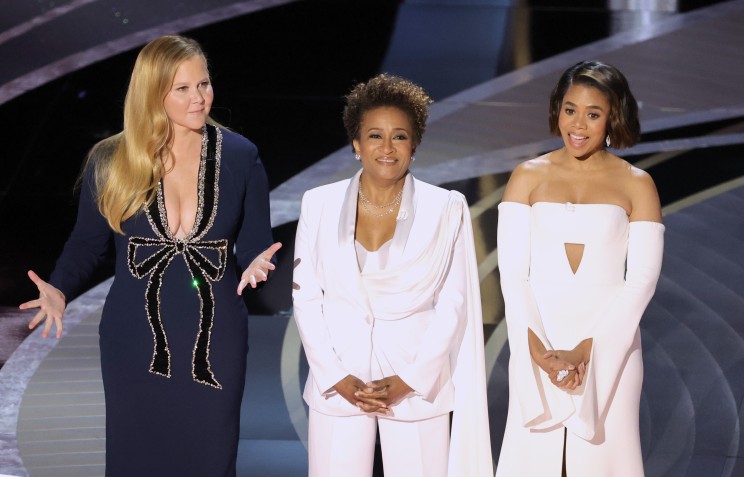 Hollywood’s biggest night quickly turned into Hollywood’s biggest political campaign. Oscars 2022 co-hosts Amy Schumer, Regina Hall and Wanda Sykes started off the three-hour telecast with jokes about gender discrimination, diversity, political divisions and homophobia. “This year, the Academy hired three women to host because it’s cheaper than hiring one man,” Schumer quipped as the comedians welcomed viewers. Sykes then took a shot at Senate minority leader Mitch McConnell with a joke about “toxic masculinity” before she and Hall ganged up against Schumer to block her from Black Twitter. The trio ended the opening monologue with the three women chanting “Gay, gay, gay!” “We’re going to have a great night, and for you folks in Florida, we’re going to have a gay night! Gay, gay gay!” Sykes jeered. The actress was referring to Florida’s controversial Parental Rights in Education bill, which prohibits lessons about gender or sexuality in school between kindergarten and third grade, which critics refer to as the “Don’t Say Gay” bill. Ariana DeBose won best supporting actress, being the second woman to win for the role of Anita in “West Side Story.” DeBose who is Black, Latina and white, is now the first openly queer woman of color to win for her acting, and the only one to be nominated, took the moment to acknowledge her historic win. “To anybody who has ever questioned your identity … I promise you this, there is indeed a place for us.” Producers were reportedly skeptical about taking a political stance at the awards show and planned to keep the show upbeat while acknowledging the crisis in Ukraine, which has killed thousands and displaced millions. “This is a really [momentous] time in humankind history, and we’re very aware of that. And so you don’t go into a show like this, I don’t think, and not be aware of that and not find a way to respectfully acknowledge where we are and how fortunate we are to even be able to put on this show,” the show’s executive producer, Will Packer, said in a press conference. Making an appropriate connection, Ben Proudfoot called on President Joe Biden to “bring Brittney Griner home” as he accepted the Oscar for Best Documentary Short for directing “The Queen of Basketball,” which tells the story of Lusia “Lucy” Harris — a Black athlete widely considered to be one of the pioneers of women’s basketball. “It’s really, really strange to be here in tuxedos, knowing what’s going on in Ukraine,” said “Power of the Dog” producer Emile Sherman. “It’s not an easy time trying to absorb what’s happening in that part of the world, while still celebrating the achievements of everyone who made this movie and all the movies here tonight.” Actress Mila Kunis, who was born in Ukraine, did not mention her homeland by name but spoke of the devastation of “recent global events” as she introduced “Somehow You Do,” performed by Reba McEntire from “Four Good Days.” Follow the 2022 Oscars with our up-to-the-minute coverage: · Live updates of all the winners, highlights and viral moments · The top celebrity red carpet looks “Recent global events have left many events feeling gutted,” Kunis said in a solemn moment. “Yet when you witness the strength and dignity of those facing such devastation, it’s impossible not to be moved.” The Academy took a stand of solidarity with Ukraine in a moment of silence following McEntire’s performance of her best original song nominee. “We’d like to have a moment of silence to show our support for the people of Ukraine currently facing invasion, conflict and prejudice within their borders,” read an on-screen message to the worldwide audience. “While film is an important avenue for us to express our humanity in times of conflict, the reality is millions of families in Ukraine need food, medical care, clean water, and emergency services. Resources are scarce and we — collectively as a global community — can do more.”