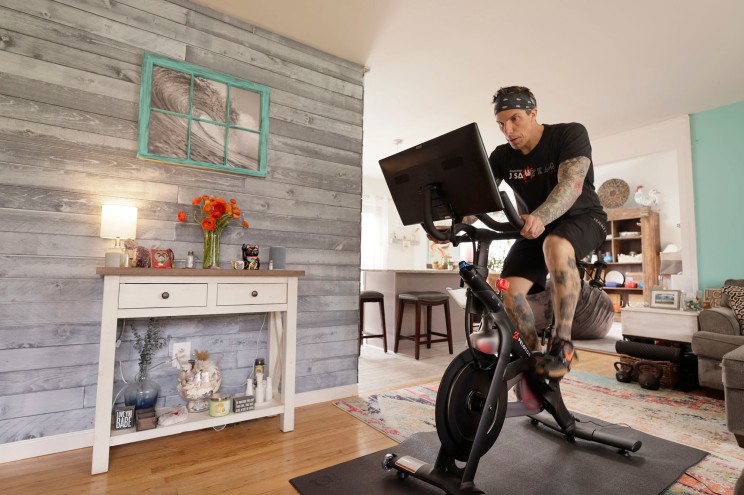 Peloton has cut its 2022 sales projections for its apparel unit in yet another sign of plummeting demand that has socked the company’s bottom line. Internal documents cited by CNBC show that the company expects apparel revenue from its apparel division to approach $150 million — a sharp revision downward from initial projections of more than $200 million. Peloton’s pessimism stems from several “macro factors” including continued disruptions in the supply chain that have hampered several sectors throughout the global economy, according to the report. Peloton’s apparel division makes up a small portion of the overall business. Its total revenue in fiscal year that ended on June 30, 2021 reached $4 billion. The apparel unit generated $107 million in revenue that same fiscal year. Peloton, the maker of connected bikes and treadmills, unveiled its line of athletic apparel last year in a bid to diversify its revenue streams as greater numbers of Americans got vaccinated and rejoined gyms and workout studios. But the rollout got off to a rocky start after Lululemon filed a lawsuit in Manhattan federal court alleging that five of its women’s bra and legging products — Strappy Bra, High Neck Bra, Cadent Peak Bra, Cadent Laser Dot Bra, and Cadent Laser Dot Leggings — infringed six Lululemon design patents. Peloton has denied the allegations. Shares of Peloton were up by more than 5% in trading on Wall Street on Monday. Last week, The Post reported that Peloton was delaying the opening of a $400 million factory in Ohio because the company is stuck with a glut of exercise machines and too little demand. The Troy Township, Ohio, factory will now open in 2024 rather than 2023, a current employee said. The delay is expected to save between $100 million and $200 million during the fiscal year 2022 to 2023, the source said. The company has also sought to combat negative portrayals of its products on hit shows like Showtime’s “Billions” as well as the new “Sex and the City” spinoff. In the season premiere of “Billions,” one of the main characters, Mike “Wags” Wagner, suffers a heart attack while riding a Peloton bike. While the “Billions” character survives, the plotline was eerily similar to a viral moment on the season premiere of HBO’s “Sex and the City” reboot “And Just Like That…,” when Carrie Bradshaw’s husband Mr. Big dies following a Peloton ride. Earlier this month, it was reported that Peloton was considering cutting jobs and closing stores after hiring consulting firm McKinsey & Co. The potential slashings come amid a spate of bad news for the luxury fitness company, whose exercise treadmills sell for $2,500 and whose chief executive, John Foley, responded poorly to a crisis last year when several young children were injured by the machines and one child was killed. Now the Big Apple-based company has retained the consulting firm McKinsey & Co. and is exploring closing 15 of its 123 showrooms in the US, Canada, the United Kingdom and Germany as well as possibly cutting jobs at its apparel division, according to a CNBC report, which cited anonymous sources and an internal recording of a management call. In fiscal year 2020, the apparel unit generated $41 million in revenue while the company as a whole reported $1.8 billion in total revenue. The company is expected to announce its earnings on Feb. 8. The company did not immediately respond for comment. Foley, who founded Peloton in 2012, has come under fire for a series of tone-deaf moves after the machinery safety crisis. The executive at first denied that the machines were unsafe if they were used properly and he fought back against a recall by the government, only to apologize for his initial response. In December, Foley and his wife held an exclusive holiday party at The Plaza Hotel — only for some of the company’s staff — shortly after Peloton announced a hiring freeze and a moratorium on parties, The Post reported. Foley denied that the event was an official Peloton party, he told The Post. “This holiday season, my wife and I hosted a personal party for our vaccinated family and friends to celebrate all NYC has been through over the past two years,” Foley wrote in a companywide email shared with The Post. “Although some Peloton teammates were invited, the event was not officially affiliated with Peloton in any capacity.” The missteps and Peloton’s financial performance — its market cap has fallen to $8.8 billion, as shares tumbled 82% in the last year — have cast a pall over the company.