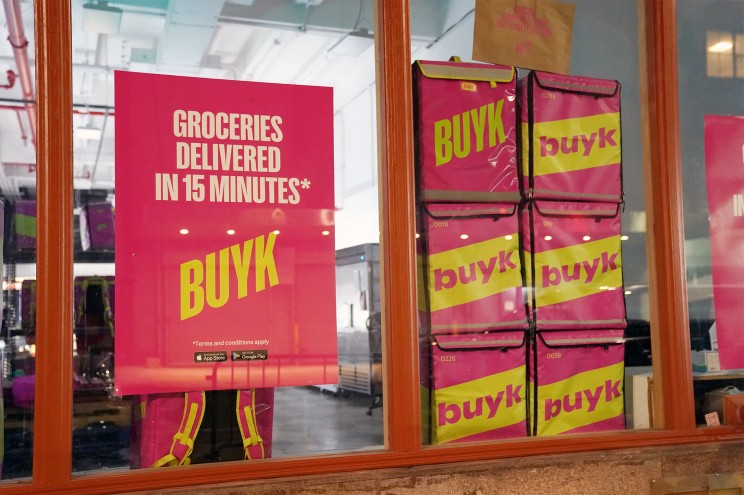 Grocery delivery app Buyk has furloughed its own CEO, who had been leading the company’s efforts to raise American money after its Russian funding was cut off due to US sanctions. CEO James Walker was put on furlough as of Tuesday morning, according to messages that Buyk managers sent to some of the 15-minute delivery app’s 650 employees in New York and Chicago. Buyk’s future — which the company says will consist of raising American money, selling itself or declaring bankruptcy — is now in the hands of its Russian co-founder, Rodion Shishkov, according to company messages shared with The Post. Shishkov created Buyk last year as a spin-off of Russian delivery app Samokat, which is partially owned by sanctioned state bank Sberbank. Shishkov, co-founder Slava Bocharov and other investors with Russian ties had been funding Buyk since it was founded last year — a position the company said became “untenable” last week as the US slapped Russia with crippling sanctions. Faced with a lack of funding, Buyk abruptly furloughed 98% of its employees on Friday, then told them that they would only receive their paychecks for the previous two weeks on-time if the company is able to find new emergency funding or a buyer this week. Before Walker himself joined the furlough list on Tuesday, the CEO told employees over the weekend that he would “will do everything I can to restart the company.” The CEO even posted a defiant selfie on Twitter on Monday morning, sporting a Buyk pin and writing that he was getting a “5am start” with a “difficult week ahead.” Since Walker had presented himself to employees as the executive who would push to save Buyk through new funding or a sale, many workers were baffled when they learned of his furlough on Tuesday. When Buyk employees in a group chat questioned who would now lead the search for new funding, Buyk’s US retail operations manager Yana Pesotskaya wrote: “Please give me time to figure out the next steps.” see also But even as Pesotskaya — a former executive at Sberbank, Burger King and Under Armor in Moscow — told employees to be patient, she herself appeared to be looking for new work. “Hi, looking for new carrier [sic] opportunities,” Pesotskaya appeared to write in a Monday LinkedIn Post. “Now settled in New York with O1 visa, which allows me to work in US. But also looking into opportunities in Russia.” Angry Buyk employees circulated screenshots of what appeared to be Pesotskaya’s post on Tuesday as they waited to learn whether they had any hope of keeping their own jobs or receiving their paychecks on time. Buyk, Pesotskaya and Shishkov did not immediately respond to requests for comment, while Walker could not be directly reached.