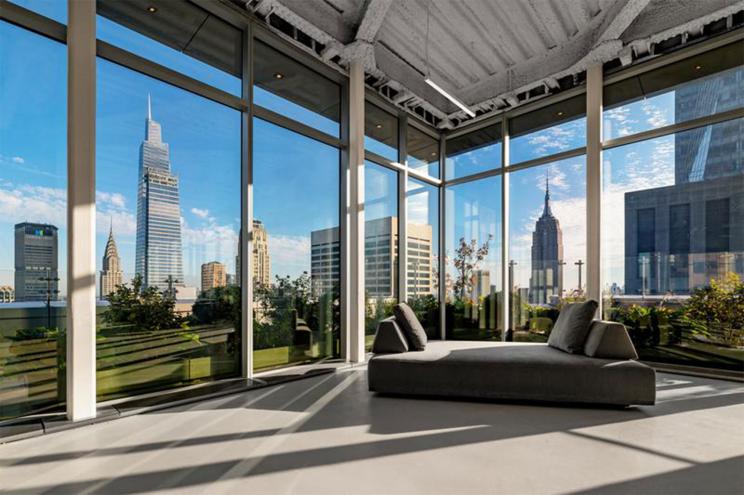 Manhattan’s leasing market showed renewed vigor after a mostly slow first quarter. The $130 million capital improvements program at 1155 Sixth Ave. continues to pay off for the Durst Organization. Some 200,000 square feet of leases were signed in the past twelve months. Now, a just-signed deal for 77,000 more square feet at the 740,000 square-foot tower’s “Apex” has boosted occupancy to over 70%. Global Relay USA, a division of a Canada-based firm that provides tech services to financial companies, is leaving a small office at 286 Madison Ave. for the 1155 Sixth Apex — a five-story block on floors 38 through 42. The 42nd floor is designed as a penthouse pavilion boasting a wraparound outdoor terrace and a thirteen-foot glass curtain wall that automatically tints during the day to reduce glare. The asking rent was $150 per square foot for the top floor and $115 per square foot for floors 38-41. The top-floor pavilion was previously mechanical space. Durst created it by establishing a new, double-height lobby entrance, which allowed the transfer of floor area to the tower’s top, Durst leasing honchos Tom Bow and Rocco Romeo explained. They repped the landlord in-house along with Tanya Grimaldo. The tenant was repped by Colliers’ Michael Cohen, Howard Kaplowitz and John Brasier. Cohen said that Global Relay was drawn by the Apex’s “200-seat, column-free auditorium,” the outdoor space and a “commercial quality kitchen within a stone’s throw of Bryant Park.” 1540 Broadway gets new financing The owners of 1540 Broadway, the former Bertelsmann Building, have secured $590 million financing of the 44-story tower’s office floors. The new loan affirmed confidence in the future of the tower and of Times Square’s entire 31 million square-foot office market. A Newmark team led by Jordan Roeschlaub and Dustin Stolly represented 1540 Broadway owners Edge Fund Advisors and HSBC in landing the loan from Apollo, MSD and Monarch. It retires $427 million in old debt and also provides $99 million for leasing campaigns, future property improvements (on top of $40 million in upgrades already completed) and interest reserves, according to a prospectus. The loan is only for the office floors; Vornado owns retail space at the tower’s base where tenants include the Disney Store. The office floors’ 907,000 square feet — technically a condominium, as is Vornado’s portion — are 66% leased to 19 tenants of which pharmaceutical software developer Schrodinger Inc. is the largest with 108,000 square feet. The loan offering cites starting rents at 1540 Broadway between $75 and $90 per square foot. The building opened in 1992 as the home of German media conglomerate Bertelsmann, which sold it in 2004. Time Warner to Deutsche Bank The transformation of Related Companies’ Columbus Circle mega-project from a media hub to a financial one is near complete. Hedge fund PDT Partners, founded by mathematics wizard Peter Muller, has leased 110,000 square feet in the office portion of the twin-towered skyscraper that was previously named for Time Warner but is now Deutsche Bank Center. Although the deal is signed and sealed, it’s shrouded in silence. No one to whom we reached out would return calls or comment: CBRE brokers who represented PDT (Ben Shapiro and Silvio Petrillo), JLL’s team for Related (Peter Riguardi, Frank Doyle, Clark Finney and Ben Bass), and a rep for Related itself. But it’s clear that PDT’s lease eats up nearly all that remained available of office space previously owned by Time Warner, which sold it back to Related in 2014. Deutsche, which moved uptown from 60 Wall St., leases 1.05 million of a total 1.2 million square feet at Columbus Circle. Asking rents are said to be in the $130 per square foot range. The move marks an expansion for PDT, which is moving from about half as much space at SL Green’s 1745 Broadway. Bill’s deal might not be fully cooked The deal we recently reported on to revive the Bill’s restaurant townhouse site at 57 E. 54th St. might not be quite done after all. Although we wrote on Feb. 27 that Hunt & Fish Club partner Christian Pascal was leasing the site for nearly $40,000 a month to launch a new eatery, a sign announcing the three-story building’s availability still hangs from the awning. Meridian Capital broker James Famularo said that the lease was in fact signed. But possible issues have arisen over Pascal’s ability to finance the project amidst market jitters over Ukraine and an uptick in Covid-19 cases. Everyone wants to see the long-dark location brought back to life — but stay tuned.