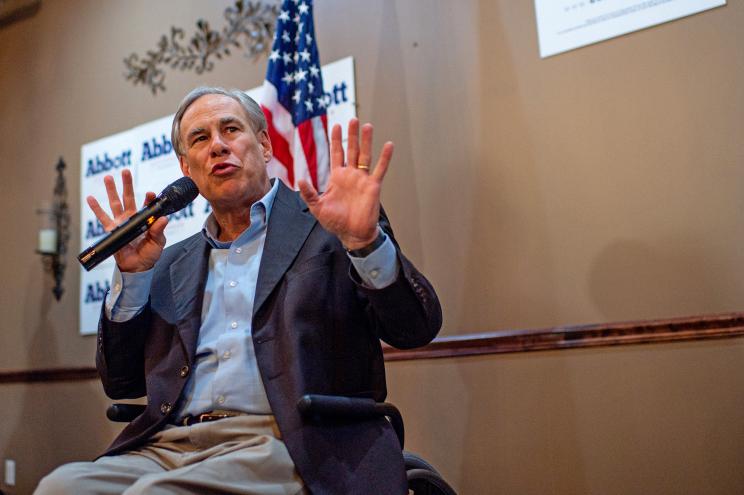 Texas Gov. Greg Abbott has cast himself as “taking a stand” against Big Tech — but some critics say it’s an awkward look as he scrambles to lure jobs from Silicon Valley. The 64-year-old governor — who last month won the GOP nomination to pursue a third term helming the Lone Star State — revealed a bill last spring that would prevent social media companies with more than 50 million users from censoring or banning Texans or their content. Abbott penned an op-ed in The Washington Post, made TV appearances and staged a press conference announcing he would introduce the legislation and later held a splashy press event to promote it. Six months later, the bill fizzled in the Texas Legislature as insiders widely expected it would. That’s even as Abbot has gone to unusual lengths on behalf of major tech companies looking to expand into Texas — most notably Apple, Google and Facebook’s corporate parent Meta. Last year, as Abbott was working to lure Facebook to build a big data center in Texas, the Tech Transparency Project sought to obtain Abbott’s communications with Facebook through a Freedom of Information Act request. Abbott asked Texas Attorney General Ken Paxton’s office to interfere and block the watchdog group’s request, according to the Texas Tribune. Abbott argued the messages contained privileged information, according to the report. The messages have yet to be made public. Last week, Meta announced it would begin construction of a $800 million, 900,000-square-foot data center in Temple, Texas. “Abbott is very cozy with Facebook,” a source with knowledge told The Post. “The reason he doesn’t want the communications public is that it shows embarrassingly close ties to Facebook.” A spokesperson for Abbott did not respond to a request for comment. Abbott, meanwhile, has “strongly discouraged” Paxton from leading a series of high-profile, multi-state antitrust investigations into tech companies including Apple, Meta, Google and Amazon, according to one source close to the situation. In February, Paxton sued Facebook, alleging the company had wrongfully taken users biometric data without their consent. Paxton has also made Google a target — he’s launched three suits against the company alleging Google is misleading and deceiving users, most recently accusing Google of tracking users’ locations without permission. Indeed, the pair’s relationship has soured as Paxton’s suits against tech companies have caused friction, sources say. “Their relationship has soured,” a source close to the men told The Post. “The tension partly comes from Paxton’s focus on pursuing suits against Big Tech companies while Abbott seeks to court the same companies. Elsewhere, Apple — which has committed to build a $1 billion campus outside Austin — is receiving a 65% abatement on property taxes for 15 years. That’s despite the fact that Texas doesn’t tax income and accordingly relies heavily on property taxes. More unusual is Abbott’s $25 million gift to Apple from the “Texas Enterprise Fund,” a state economic development arm that’s controlled by Abbott. “Greg Abbott is beholden to Big Tech,” a GOP strategist who spoke on the condition of anonymity told The Post. “He has taken hundreds of thousands of dollars [in campaign donations] from Apple and Google and given them over $25 million in tax breaks.” Two of Abbott’s proteges from his days as Texas attorney general have gone on to embed themselves in tech. David Edmonson, who served as a law clerk when Abbott was Texas attorney general, now run the southeast region of TechNet, a Big Tech advocacy group. Jim Sheer, a former deputy division head during Abbott’s tenure as AG, is now a key lobbyist for Google. At the same time, Abbott has brought tech insiders into state government – appointing a Google executive who runs staffing in Texas to the Jobs and Education for Texas Grant Program Advisory Board. “To say you’re combating Big Tech while openly courting them … people need to know that’s where he is,” Jon Schweppe, Director of Policy and Government Affairs at American Principles Project told The Post. “It makes you wonder how serious he is.” Abbott has also relied on tech companies to support his campaign. Top lobbyist at Apple Marc Rodriguez has donated $20,000 to the governor since 2018. Rodriguez also spent $5,700 to cover the expenses of multiple fundraisers Abbott held. Another Apple lobbyist, Jennifer Rodriguez, has donated $7,500 to Abbott since 2020. McGuire Woods, which lobbies on behalf of Apple and Google, has given Abbott $20,000 since 2015. “If you don’t want people to question your motives, don’t take their money,” Schweppe adds.