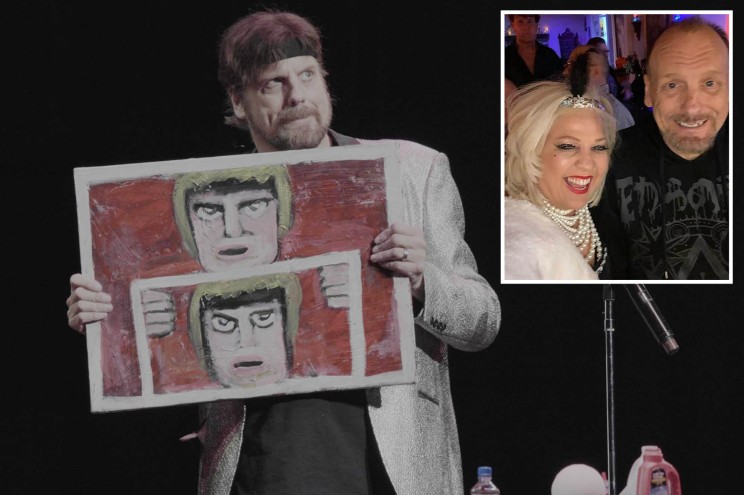 John Edward Szeles, the standup comic and magician who delighted in shocking audiences for decades as “The Amazing Johnathan,” died Tuesday after a long battle with heart disease. The self-described “Freddy Krueger of comedy” was 63. “Johnathan Szeles (Amazing Johnathan ) has passed away at around 11:30 pm 2/22/22,” fellow standup comic Penny Wiggins, 60, posted on Facebook. “My heart is broken. One of my best friends, one of the funniest humans I’ve ever met. I loved him so very much and will never forget this wonderful, amazing, kind, funny, great person.” Detroit native Szeles gained mainstream fame on Vegas headliner Criss Angel’s mid-2000s reality TV show “Mindfreak,” and often injected gonzo, faux-gore bits into his shows. Signature shock value moments included pretending to suck on his own dangling eyeball, slitting his wrists and spiking his own tongue. The Bally’s casino star attraction and Comedy Central staple — who reportedly earned $3 million a year at his peak — was diagnosed in March 2007 with “a serious heart condition,” the Las Vegas Journal review reported at the time. “I was told I have a year to live,” he announced during a public appearance in 2014. The audience, assuming the dark declaration was another of his pranks, started to laugh — but he stopped them: “Not a joke,” he confirmed, his voice cracking. His official website later identified the illness as cardiomyopathy and announced that, thanks to a combination of weight loss and blood thinners, his health was improving. The “alt-magician” gained further notoriety as the subject of a controversial 2019 Hulu documentary, “The Amazing Johnathan Documentary.” The film followed Szeles, then 60, as he mounted a comeback tour after defying his terminal illness diagnosis — and simultaneously dealing with an ongoing drug addiction. Earlier on Monday, Szeles’ wife of nearly eight years, stuntwoman and magician Anastasia Synn, posted that her husband was “completely unresponsive” and reaching the final stage of life after an “absolute nightmare” week. “His decline was fast, but it also wasn’t. He is so strong,” Synn wrote in an emotional plea for loved ones and acquaintances to stop texting and calling him during his hospice care. “He has beaten the odds for so long. I know you all love him so much and everyone wants to say goodbye.” Synn continued, “I don’t think we thought this day would ever come because he is so strong and has beaten it so many times. Thank you for all the well wishes, but as the news spreads it’s getting overwhelming and I’m going to to have to take a step back. I love you and thank you for your support.”