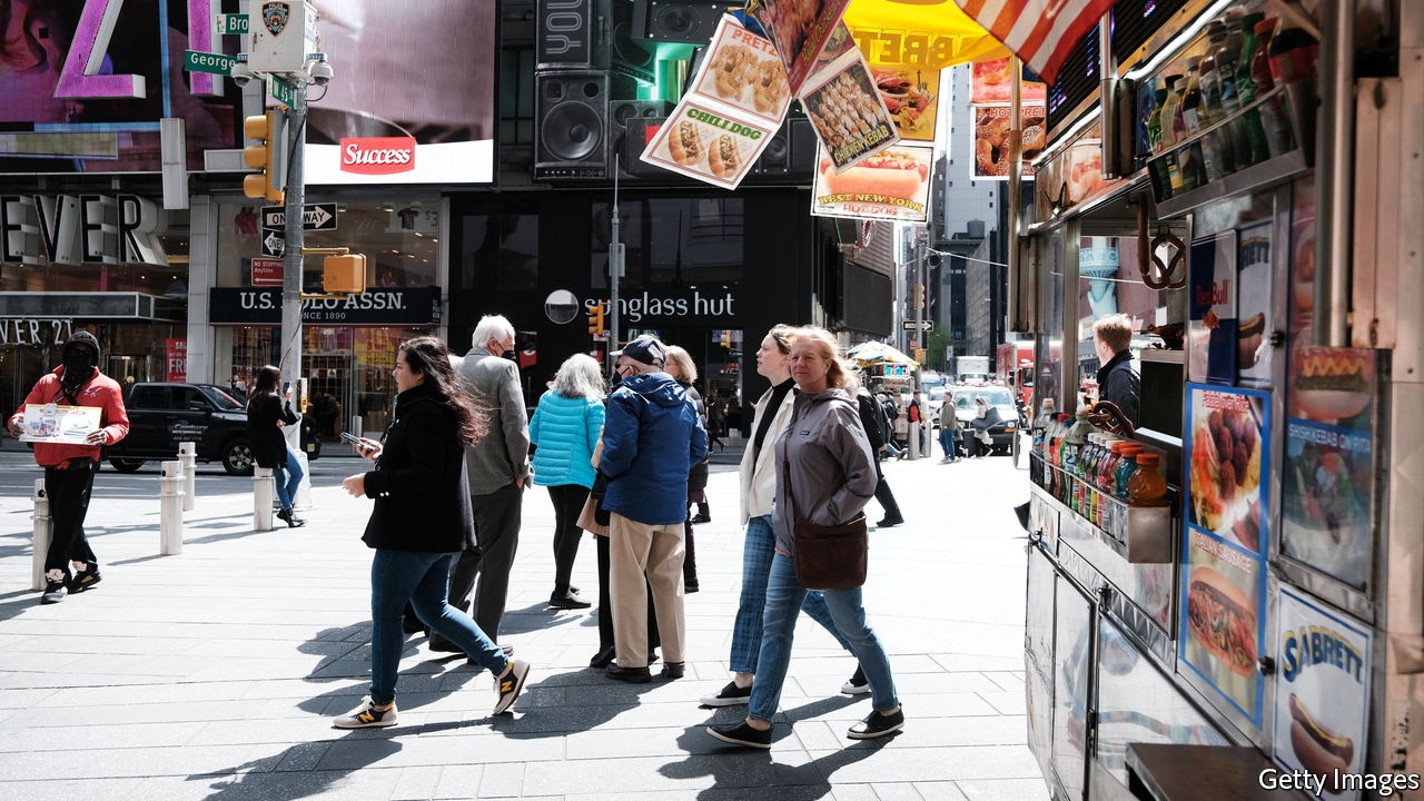 Asked recently about Amazon’s sprawling network of warehouses Brian Olsavsky, the firm’s finance chief, did not mince words. “We have too much space right now.” Faced with a surge in demand during the pandemic, the online retailer doubled its capacity from 193m square feet (18m square metres) at the end of 2019 to 387m square feet two years later. Today it has a glut, which the company says is costing it tens of millions of dollars a day. Retailers are bracing themselves for a slowdown, or even a recession, as the Federal Reserve raises interest rates. But Amazon’s troubles reflect another crucial factor for the American economy: a shift in spending from goods back to services which could lower inflation, making the Fed’s job easier. Target, another retailer, reported a 52% drop in net income in the three months to April, compared with the previous year, which it blamed in part on a rapid slowdown in demand for appliances, furniture and televisions. “We [expected] the consumer to continue refocusing their spending away from goods and into services,” Brian Cornell, the firm’s boss, said, but “we didn’t anticipate the magnitude of that shift.” Overall, the switch should ease pressure on global supply chains and lower inflation. But it has been slow and uneven. Confined to their homes during the worst of the pandemic, Americans splurged on appliances, cars and furniture. Fiscal largesse, including three rounds of “stimmy” cheques, helped fuel the buying binge. People bought substitutes for the services they could no longer avail themselves of—an exercise bike, say, to make up for closed gyms. Perhaps as a result of having a little extra cash, they also treated themselves to things like watches and luxury products. A year into the pandemic the composition of consumer spending had changed dramatically. By spring 2021, goods accounted for 42% of household spending, up from 36% before the pandemic; services accounted for 58%, down from 64%, a drop worth more than $900bn per year. Several other Western countries experienced a similar rise in goods consumption, though few witnessed a bigger boost than America. Daan Struyven and Dan Milo of Goldman Sachs, a bank, compare the evolution of real goods spending across 23 oecd countries and find that only Chile and Norway outperformed America. In Japan, goods purchases in the last three months of 2021 were 7% below pre-pandemic trends. America’s spending spree helped lift the economy out of recession, but it also contributed to an inflation headache. The deluge of new orders overwhelmed global supply chains, which were already suffering from pandemic-related disruptions, leading to clogged ports and shipping delays. With demand outstripping supply, goods prices rose. The Bureau of Labour Statistics reckons that goods prices boosted consumer-price inflation by 4.9 percentage points in the year to April 2022, having reduced it by 0.1 points in the 12 months before the pandemic. Now spending is starting to shift in the other direction. Data published on May 27th by the Bureau of Economic Analysis show that spending on goods fell in the year to April, and is now 9% above its pre-pandemic trend, down from a high of 16% last year. Spending on services is up by 7% in the same period, and is just 3% below pre-pandemic trends. But some services have been quicker to recover than others. Messrs Struyven and Milo of Goldman Sachs note that while “fun” spending categories with pent-up demand such as food services, air travel and hotels have rebounded over the past year, others have lagged behind. Services that cater to white-collar professionals have also been slow to recover. Mass transit spending is about 50% down from what it would have been, absent the pandemic; laundry and dry-cleaning revenues are 20% below trend. Even some essential services have been slow to bounce back. Spending on doctors’ and dentists’ services is roughly 15% below the pre-pandemic trend; child care is down by 22%. Appetite for many non-essential goods, meanwhile, shows little sign of abating. Spending on jewellery and recreational vehicles are 53% and 43% above trend, respectively. Spending on pets is up by 23%. One question is whether the composition of consumer spending will return to pre-pandemic norms. The hope is that this eases supply-chain bottlenecks and helps bring down inflation. Yet several uncertainties lie ahead. The process looks likely to be slow. Although Target was wrong-footed by the force of the shift towards services, if recent trends continue, goods and services spending would only return to pre-pandemic levels by perhaps the third quarter of next year. And some habits could well stick: the rise of remote work, say, may have permanently changed the consumption mix, keeping the relative demand for goods higher than it was before the pandemic. Hovering over all this, though, is a potentially souring economic environment. Consumer-price inflation is outpacing wage growth, and households are getting gloomier about their personal finances. American consumers powered an extraordinary goods boom over the past couple of years. What they do next is much less certain. ■