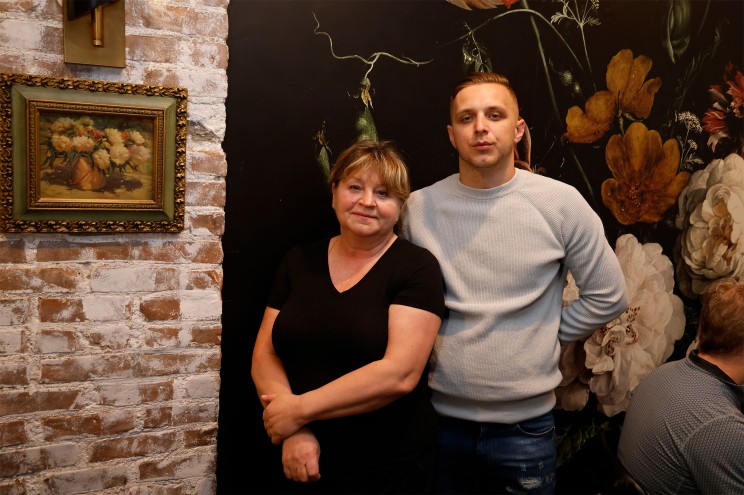 Even as part of her family was pummeled by Russian bombs in northeastern Ukraine, Svetlana “Sveta” Savchitz ran in and out of the kitchen at her restaurant in the West Village on Saturday night – making sure things ran just right. It was packed at Sveta, at 64 Carmine St., with New Yorkers sitting at boisterous communal tables, celebrating life. In Ukraine – where her family lives in Kharkiv – people were fighting for theirs. Most of her staff is Ukrainian, too – and as their homeland is bombed while they serve Eastern European-inspired food and watch the devastation unfold on TV, some are thinking of picking up their arms to join the fight. It’s a long way from that happy day back in November 2019 when Savchitz, 64, opened Sveta with her 26-year-old son, Alan Aguichev. At that time – although they are Ukrainian – they billed the restaurant as Eastern European and Russian because they thought it’d be easier for people to understand – “and the food is basically the same,” Aguichev said. Now, they’re wanting to emphasize the difference, especially after the restaurant got some anti-Russian hate mail after that country’s invasion. They did some rebranding to make it clear the restaurant is “modern European” – and Ukrainian. “The Ukrainian flags I ordered just arrived,” Aguichev said. “We are putting them outside the restaurant on Monday,” Meanwhile, the restaurant’s heart is very much in Ukraine, though their background speaks to just how complicated the situation is. Get the latest updates in the Russia-Ukraine conflict with The Post’s live coverage. All of their family — including Savchitz’s two sisters and their families — are still in Kharkiv, and they speak often through the invasion. But Savchitz’s mother was born in Moscow, and she still has family there, too. “Today, my cousin was basically saying goodbye to me,” Aguichev said of a relative in Ukraine. “He has been fighting since Day One. He said he prays that he can meet my son. We had been planning to visit this summer. But we don’t know if we will ever meet again. We just said how much we love each other and he said to take good care of ourselves in America.” In Ukraine, Savchitz’s male relatives are fighting, and Savchitz’s niece almost lost her life when her apartment building was bombed by Russians. And yet, speaking to her Russian relatives is perhaps even more painful, she said. Thanks to intense propaganda — Russian access to Facebook and Instagram has been cut — Russians don’t believe that Russian soldiers are killing civilians and destroying their homes — let alone committing documented war crimes, Savchitz says, as she squeezed in beside a Post reporter, emotionally exhausted and her eyes filled with tears. “In Kharkiv, my niece lives in a building that has been bombed and she almost lost her life. But my relatives in Russia don’t believe it. They say, ‘No, Russia would never bomb residential neighborhoods.’ I tell them it’s not true, but they don’t believe me,” says Savchitz, her eyes red from crying. “Nobody knows what Putin wants,” she added. “Thirty years ago, when I left Ukraine, I felt Russian. Now I feel like my mind, and everything inside, is destroyed.” Aguichev, Savchitz’s son, says he can’t believe the war is something that the Russian people want, but “propaganda makes it hard to convince people” of reality. “They just believe everything they hear. But the reality is that the invasion is terrorism. Russia is committing war crimes,” Aguichev said. Meanwhile, the restaurant’s menu illustrates the ties between the two countries, even as the war escalates – dishes like Russian borscht, Russian fur coat salad, vereniki (potato dumplings) and sushi with red caviar. The mother-and-son duo opened Sveta following a successful ten year run with another restaurant, Sveta’s House, in Rego Park, Queens. After COVID hit soon after their restaurant’s opening, Savchitz and Aguichev “saw an opportunity” thanks to the city’s outdoor dining mandate. They created a stylized, Instagram-worthy outdoor dining garden — in a landmarked area that otherwise would not have been open to outdoor dining. That’s when they created some of their famed slushy to-go “Sveta’s crushers,” like frozen rose in plastic with straws. Paula, Aguichev’s wife, came in to help them. Sveta provided sanitized Russian fur hats and coats to keep their customers warm during the cold winter months, and hired bands to play live music, lifting spirits during lockdown. As the pandemic wound down, business — thanks to the following they had developed during lockdown — was looking up. Then Vladimir Putin invaded Ukraine. Aguichev says he is also launching a Go Fund Me page to send money to Ukraine, and says the hold up has been finding a safe way to make sure the funds get to Ukraine. And other things have changed: The Instagram-worthy cocktails, like cotton candy mimosas, are now yellow and blue, honoring the colors of the Ukrainian flag. Generally, though the crowd at Sveta’s — which is more of an international New York mix than a Russian or Ukrainian group — is supportive, Aguichev said, as he tries to hold it all together. “Thank God, we speak to all of our family in Kharkiv. It’s very emotional,” Aguichev said, choking up. Watching the death and destruction, live, on television, is taking a toll. “My homeland is literally being destroyed. Freedom Plaza, where I have been, is just gone. We are still doing the right thing. We want peace and we know so many Russians want it, too. We know that tragic events can unite people. But sometimes it’s too late.”