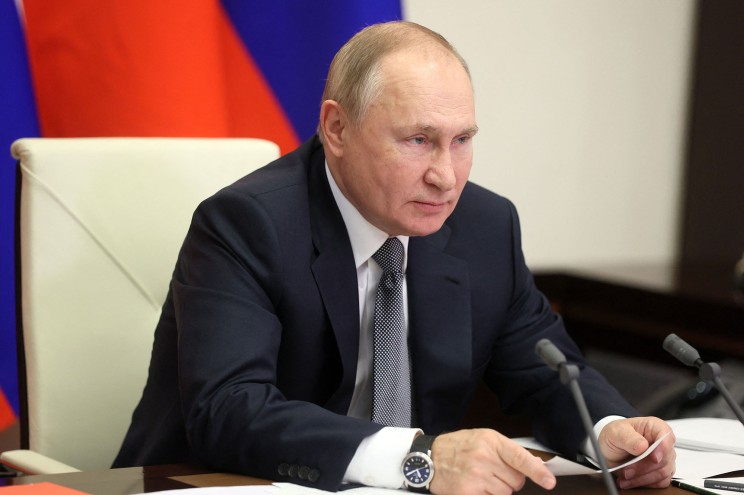 The Biden administration said it will follow in the footsteps of the European Union and impose sanctions against Russian President Vladimir Putin over his decision to send troops into Ukraine. “Following a telephone conversation President Biden held with European Commission President Ursula von der Leyen and in alignment with the decision by our European allies, the United States will join them in sanctioning President Putin and Foreign Minister Lavrov and members of the Russian national security team,” White House press secretary Jen Psaki said on Friday. But the practical implications of such a move, which is also reportedly being considered by the United Kingdom, are unclear for a variety of reasons. Josep Borrell, the EU’s foreign policy chief, said that Putin and his top diplomat, Russian Foreign Minister Sergey Lavrov, were placed on a list of sanctioned individuals in response to the unfolding crisis in Ukraine. “Let me flag that the only leaders in the world that are sanctioned by the European Union are Assad from Syria, Lukashenko from Belarus and now Putin from Russia,” Borrell told a news conference after a meeting of EU foreign ministers to settle details of the bloc’s sanctions. Borrell added: “I can assure you that if you got major assets and all of a sudden you can’t get hold of them, it will cost you.” Slapping sanctions on individuals entails preventing them from travel to and from certain jurisdictions. It also bans companies from engaging in any sort of transaction with those persons, whether it be banks, private schools, or other entities. The US has placed sanctions on Russian banks, banning them from access to the American financial system. Putin’s spokesperson, Dmitry Peskov, has gone on record as saying that any sanctions leveled against his boss would be “politically destructive” to US-Russian ties, though not necessary “painful” for Putin personally. That’s because Putin’s assets, which are believed to be most vast than any human in the world, are hidden from view. Putin doesn’t need to hold his assets in traditional institutions like banks or brokerage firms because the entire Russian economy — with its significant oil and natural gas stockpiles as well as its rich array of natural resources – is under his control. The president’s inner circle is comprised of oligarchs who are worth hundreds of millions of dollars. The vast net worth of these cronies, who hide their wealth in offshore tax havens, suggests that Putin is far more richer than he is letting on. The Kremlin’s official disclosures indicate that Putin earns $140,000 per year. He also owns three cars, a trailer, and an 800-square foot apartment, according to documents. Those with intimate knowledge of the Russian economy, however, think Putin’s net worth rivals those of the richest people in the world. Bill Browder, a US financier who was banned from Russia after running afoul of the Kremlin, told the US Senate in 2017 that Putin was “one of the wealthiest men in the world.” His total assets were valued at $200 billion, according to Browder. “Everything that belongs to the territory of the Russian Federation Putin considers to be his,” exiled Russian billionaire Sergei Pugachev, a former member of Putin’s inner circle, told the Guardian in 2015. “Any attempt to calculate [his net worth] won’t succeed.” With Post wires