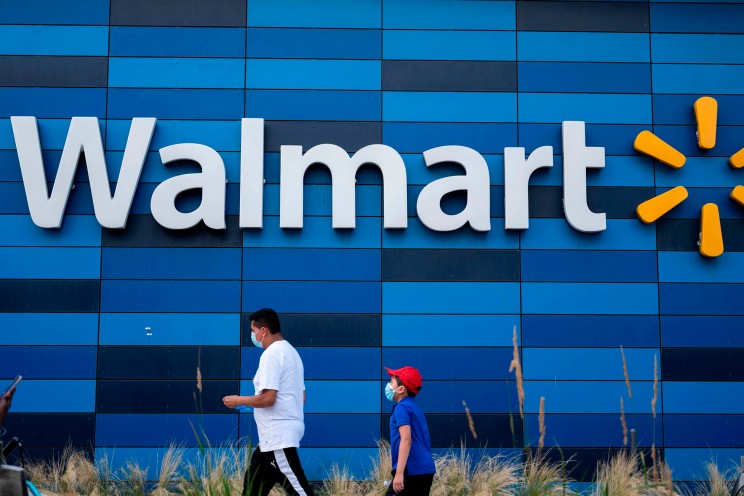 Walmart overcame rising inflation, a snarled global supply chain and surging costs related to COVID-19 sick leave among its workers to deliver strong fourth quarter results Thursday. The nation’s largest retailer, based in Bentonville, Arkansas, also delivered on Thursday an upbeat outlook for this year and boosted its dividend. Shares rose nearly 2% in morning trading. Walmart is the first major retailer to report fourth-quarter fiscal results, which include the critical holiday shopping period, and is considered a major barometer of spending given its size, so analysts carefully parse through the data. Walmart executives said that its shoppers are still in good financial shape, and they don’t see any major changes in consumer behavior patterns like trading down to cheaper labels but they are paying attention to higher prices. It also expects supply chain issues to ease in coming months. Still, like other retailers Walmart is facing rising costs for everything from labor to shipping as supply chain backups hit companies worldwide during the holidays. It’s also grappling with pressures from spiking inflation across all types of items, particularly food. This past holiday quarter offered an extra challenge: a contagious new variant, omicron, that forced many workers to take sick leave, resulting in surging costs for companies having to hire workers to replace those who were out ill. In fact, Walmart’s CEO Doug McMillon told analysts on the call following the earnings release that the latest quarter’s COVID leave peak was higher than anything it experienced in all of 2021 or 2020. But Walmart used its clout to muscle through the big challenges by chartering vessels for its goods as it moved into the holiday shipping crunch. As for managing inflation, it said it’s using years of expertise from monitoring surging prices in other parts of the world like Mexico and South America where it does business. McMillon said Walmart is closely working with suppliers to manage inflation and is keeping price gaps with its rival where it wants them. It’s particularly focused on keeping prices low for basic items that its low-income segment depends on. But Walmart, which caters to a broad array of shoppers at all income levels, has also seen opportunities in this inflationary environment. “Walmart US customer looks like the US population, and it does to a really large degree,” McMillon told analysts. “And so we’ll serve everybody. And during periods of inflation like this, middle-income families, lower-middle-income families, even wealthier families become more price sensitive. And that’s to our advantage. ” In fact, Walmart said that its “rollbacks” — a temporary price reduction on an item — are significantly up from the end of the third quarter and about where it was at the end of the first quarter last year. Net income reached $3.56 billion, or $1.28 per share, in the quarter ended Jan. 31. Per share earnings adjusted for one-time costs and benefits were $1.53, or 3 cents better than Wall Street expected, according to a survey by FactSet. Total revenue rose 0.5% to $152.87 billion. Analysts expected $151.72 billion, according to FactSet. Last year during the same period, the company lost $2.9 billion due partly to costs related to the pandemic. The company said that although COVID costs were lower than last year, it had significantly higher worker leave costs in the US than anticipated. In the first three quarters combined, COVID leave costs were about $600 million but increased over $450 million just in the fourth quarter, the company said. Same-store sales rose 5.6% at US Walmart stores, down from a 9.2% jump in the third quarter. Online growth has slowed from the pandemic-infused sprees of early 2021 and rose just 1%, down from 8% growth in the third quarter, and a nearly 70% surge in the same period a year earlier. Retail sales in the US jumped a surprisingly strong 3.8% from December to January, the Commerce Department reported this week, with robust spending almost across the board. It was the largest month-to-month jump in spending since last March when Americans got a federal stimulus check worth $1,400. Walmart said that sales growth in the current fiscal year will be above 3% with earnings growth in the mid-single digit percentage range. Walmart raised its quarterly dividend by one penny to 56 cents per share. Shares rose $1.88 to $135.47 in morning trading Thursday.