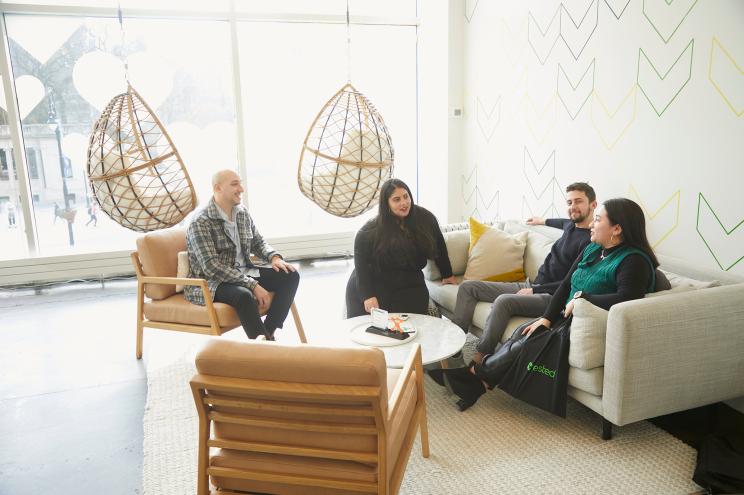 Forget all the chatter about employees never wanting to go back to the office again. According to Jim Clifton, CEO of pollster Gallup, the majority of workers want to return at least some of the time. The reason? To collaborate, socialize and make important decisions alongside co-workers. “The [office] building becomes an event center for you, and a collaboration center ,” he said in a podcast conversation with Gallup editor Mohamed Younis. “Because if you’ve got something really hard you want to work on with me, you need to come and draw it on a board for me.” That’s also the conclusion of the CEOs of the companies we reached out to when we asked them about their return-to-office plans. The big differentiator? Most are leaving the choice about how and when they want to come to work up to their employees. Here’s what we learned about what firms are doing to keep their employees happy. Making the office space irresistible When chief people officer Loreal Torres surveyed the staffers at Vested about returning to the workplace, she got an answer not commonly heard in the news. “Seventy to 80% said they’d prefer to come in,” she said, adding that they wanted the freedom to come and go as they please. For this financial marketing and communications agency, it meant rethinking their setup. When they opened their Union Square-based offices last fall, the workers who came in loved what they saw — a dozen desks, round and long tables, banquettes and sofas, three conference rooms, a huge kitchen filled with coffee and snacks and swinging chairs at the entrance, which some employees use when talking on the phone. While most workers show up a day at a time, or even just a few hours to meet and then go home, Torres recently had her entire HR team in for a week for yearly planning. Even so, “our meetings are set up with a Zoom or Google Meet,” she said, enabling participation among people outside the office. Office manager Joanna Barragan was the first to return. “I was happy to be back,” she said. Think outside the box Adam Lyons, CEO of Texas-based S.M.A.R.T. Blueprint, moved his company’s headquarters to his farm during the early part of the COVID-19 pandemic. “We had a large building we were using for storage. I set up our offices there,” said Lyons. “I put in a kitchen and a hot tub, built a gym, a library and a hangout space.” With 80 chickens and 20 cows, his employees could enjoy fresh eggs and milk while observing the rules of social isolation. “I wanted us to stay connected, beyond Whats-App and video,” said Lyons, adding that now that working side-by-side is considered safe, “he wants the ranch to be “a fun place to come, not a place you have to come.” S.M.A.R.T. Blueprint also provides its workers with a hot breakfast and lunch and reimburses his lower-paid workers for their commute. Eve Shalakhova, a vice president at the company, said that the solution works well for her. “It’s very enticing to come here,” she said. The setup also works for Farhad Irani, chief technology officer. “Nothing compares to having access to a beautiful ranch while you’re at work,” he said. “I often take walks throughout the day, pet animals, and head right back to work.” Offering something for everyone With her company focused on employee retention, Caliber Corporate Advisers CEO Grace Keith Rodriguez had an interesting problem on her hands. Some staffers had sent her e-mails saying they wanted an office to work from, while others said they would prefer not to commute. Rodriguez, who had moved to Rockland County and had a baby during the pandemic, fell in the latter camp. She’s the boss, but it didn’t mean that others’ preferences mattered less. “We had to be creative and come up with a solution that works for everyone,” she said. “We wanted to offer flexibility.” The solution came with a large, multilocation coworking firm where Caliber staffers could show up and get a desk or meeting room as required. When the plan was announced, “everyone was ecstatic,” she said. Kyle W. Kempf, a senior director at the firm, likes the solution because of the possibilities it offers. Although he’s perfectly comfortable working from his apartment in Chinatown, he likes to go into an office to join his co-workers now and then, adding that it “makes other things possible, like going out for drinks after work.” Don’t force the issue No one needs to tell Liza Streiff that it can be hard to work from home. The CEO of financial-training firm Knopman Marks Financial opened a satellite office in Montclair, NJ, during the height of the pandemic because she couldn’t get anything done with three small kids around. They chose to maintain an office near Bryant Park, although no one is forced to use it. “People just enjoy having a space to go to,” said Streiff. “When they have a choice, it’s a lot different than having to go in.” Streiff said that the company must be intentional about maintaining bonds and how everyone collaborates. To work toward that, Streiff hosted a big barbecue at her home in Glen Ridge, NJ. The company has since held other events like a meet-and-greet for its interns last summer. Jane Riccardi, a 26-year-old onboarding coordinator who lives in Tribeca, has been back to the office several times since it reopened. “I went mostly for a change of scenery,” she said, adding that “it was really nice to see people.”